Free screening and Discussion of Emmy Award winning documentary “The African Americans: Many Rivers to Cross”

There will be a free screening and discussion of the acclaimed documentary “The African Americans: Many Rivers to Cross” by Henry Louis Gates Jr. at 1 p.m. and 6 p.m. on Monday, Jan. 20, at the Paramount Theater, 125 Fourth Ave. NE, Austin, Minnesota 55912.

There will be hot chocolate and coffee for all. Free popcorn to the first 50 people at each showing.

“The African Americans: Many Rivers to Cross” is written and presented by Professor Henry Louis Gates Jr., director of W.E.B. Du Bois Institute for African and African American Research at Harvard University. This six-hour series explores the evolution of the African American people, as well as the multiplicity of cultural institutions, political strategies, and religious and social perspectives they developed — forging their own history, culture and society against unimaginable odds. 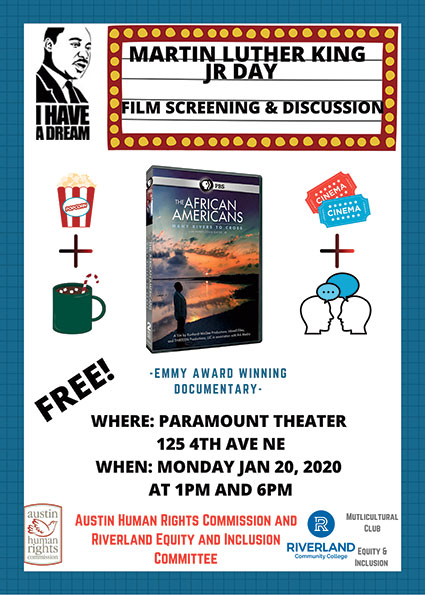 Commencing with the origins of slavery in Africa, the series moves through five centuries of remarkable historic events right up to the recent past — when America was led by a black president, yet remains a nation deeply divided by race.

By highlighting the tragedies, triumphs and contradictions of the black experience, the series reveals to viewers that the African American community has never been a uniform entity, and that its members have been actively debating their differences from their first days in this country.

Throughout the course of the series, viewers will see that the road to freedom for black people in America has not been linear, but more like the course of a river, full of loops and eddies, slowing, and occasionally reversing the current of progress.