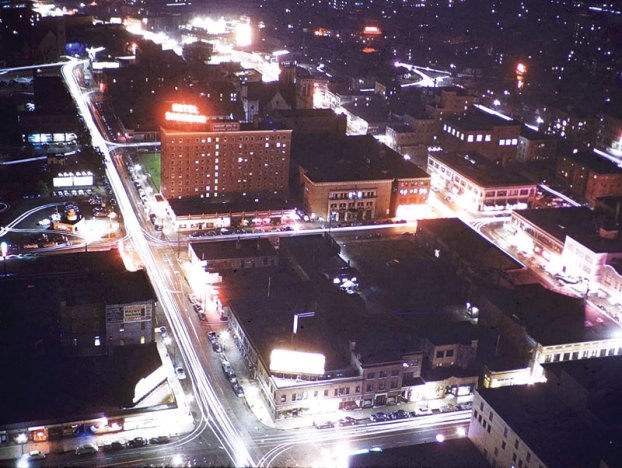 A time-exposure photo of traffic on streets in downtown Minneapolis, likely taken from atop Foshay Tower, looking southwest, circa 1951. Photo by David Tewes

Hidden for decades, work of Minnesota photographer gets its own museum exhibit

As he served during World War II, and after his return to Minnesota, amateur photographer David Tewes displayed a unique skill and eye for taking pictures.

In his hometown of Hutchinson, Minn., in trips to the Twin Cities and beyond, Tewes experimented with lighting and composition in ways that set him apart from the growing number of people taking photos in the late 1940s and 1950s.

After Tewes died without direct heirs in 1991, a case of hundreds of his slides was packed away in the attic of an outbuilding on a cousin’s hobby farm near Mayer, Minnesota — where the images sat, unseen and largely forgotten, for more than a quarter century.

Then three years ago, the trove of slides was rediscovered. And thanks to a combination of dedication, technical know-how and chance, the work of David Tewes is now on display in its own exhibition at the Minnesota Marine Art Museum in Winona. The exhibit, called “Shutterbug,” opened this month and runs through May 3.

Tewes “clearly understood how photography worked and how to make images that would please his viewers. He was very skilled — especially for someone who had no background, no particular training,” said Drake Hokanson, an independent photographic scholar from La Crosse, Wisconsin, who will be giving a lecture connected to the exhibit on Thursday. “In those days you didn’t see what you had until you sent it in and waited two weeks until the slides came back. And then you knew whether it was successful or not. So he was pretty clearly studying the technology quite well.”

On a spring day three years ago, Chris and Christina Finke were clearing out a building on the hobby farm near Mayer. It belonged to Christina’s dad, Doug Tewes, who had died a few years before.

Then he spotted something different on a shelf, in the back of the attic, where the roof met the wall. It was a hard-sided case. Inside were hundreds of old photographic slides.

“I looked at a couple of them and I thought, ‘That’s kind of some interesting stuff in here.’ There’s pictures of Hutchinson — things that might be worth holding onto,” Finke said this month from his home in Oregon.

At first, Finke and his wife didn’t know if the pictures were from a relative, or perhaps just something Doug Tewes had picked up at an auction. Finke packed the case in his carry-on luggage for the flight home.

“Once I got home, (I) started really looking through them. And there was, I think, maybe just one slide in there that had David’s name on it. And that’s kind of how we we realized who had taken them,” he said.

The mystery photographer was David Tewes, a cousin of Finke’s father-in-law. Tewes was 77 when he died in Hutchinson. After returning from his wartime military service in Alaska, he worked for the local highway department and then painted houses in Hutchinson.

According to David Tewes’ obituary from the Hutchinson Leader, he never married or had kids. Those who knew him recalled in the obituary his love of the arts, gardening, trips to the State Fair and picnics with friends. He was known for making Christmas cookies and candy, and delivering it to friends.

The obituary makes no mention of photography.

Tewes’ slides cover about a decade, starting with his military service in the Aleutian Islands in the mid-1940s and stretching into the mid-1950s. The black-and-white photos from Alaska show life on the remote base on Attu Island, including soldiers celebrating V-J Day in 1945.

On his return to Minnesota, Tewes started shooting with Kodachrome color film — scenes around Hutchinson, visits to Minneapolis and elsewhere in Minnesota, and trips to the West Coast. Some of the photos are long-exposure nighttime images — something that can be hard to do well with modern digital technology, let alone the film and lenses available decades ago.

Tewes also created unique “title” slides — images that would have been used to introduce groups of photos during home slideshows.

Back at his home in Oregon, over the course of several weeks, Chris Finke devised a way to scan the 650 slides.

“For sure nobody’s seen these pictures in 30 years. And, you know, possibly no one’s really seen (them) since he took them,” Finke said — so he created a website to display them.

He also posted tips on how to digitize old slides — which, by chance, were spotted by staff members at the Minnesota Marine Art Museum.

They were looking for some technical information, but they saw the potential for much more in Tewes’ work, particularly the photos of lakes, rivers and oceans that fit with the museum’s focus. So they worked with Finke to create the “Shutterbug” exhibit.

Dave Casey, assistant curator of education and exhibitions at the museum, said the images carry both artistic and historic value that merit an exhibition. In addition to documenting that era, they also serve as a lesson of what photography was like and how it was experienced in the 1940s and 1950s. And Tewes’ unique eye and experimentation created visually interesting work.

Casey said the exhibit can also remind people about the importance of saving old family photos.

Drake Hokanson’s lecture at the museum — it starts at 6 p.m. Thursday — will examine Tewes’ work and also cover ways to preserve family photos for future generations.

Hokanson said if you have old family photos and don’t want to keep them, instead of throwing them away, take the time to find a relative who is interested in family history.

“If you can get those collections of photographs into the hands of that family member, then they have a chance of persisting into generations in the future,” he said. “These become important historical documents for families. What did that great uncle look like, the one who was in World War I? Here’s a Civil War portrait of someone. These things become important in families, not just for genealogy, but somehow to anchor us to our places, to anchor us to those generations who came before us.”

Hokanson said people should look through old photos with older family members, and write down — with pencil, on the backs of photos — anything they can recall about the images. And give thought to where old photos are kept.

The lessons about family photos are ones that Chris Finke is taking to heart. After saving and sharing David Tewes’ photos, recently he talked with his wife as they worked to create backup copies of their own family pictures.

“I said, ‘Is it even worth it? Like, are kids going to care in 50 years that we have home videos of us, you know, carving pumpkins at Halloween?’ ” Finke recalled telling his wife. “And she said, ‘Well, I mean, people care about David Tewes’ photos.’ Even if it doesn’t seem significant, that kind of — you know, slice of life stuff — people love it. People are always going to want to see that.”

Finke said there are a lot of unanswered questions about Tewes’ photos. For one — the case of slides stopped at around 1955.

“There’s got to be … a trove somewhere of slides or photos that he took from 1955 to, you know, who knows when?” Finke said.

There are questions about Tewes himself — how he picked up his photography skills, his wartime experiences and his life back in Minnesota. Finke said he and his wife haven’t had much luck finding relatives who knew Tewes.

And there’s also a photo of the words to a slightly bawdy ode to the latrine that Tewes and his fellow soldiers used at their cold, windswept base in Alaska. Finke wonders if Tewes wrote it.

Finke said he hopes some answers may come as more people see the photos. He’s already received a lot of positive feedback from people who’ve recognized places and events Tewes captured on film.

“People email me saying, ‘I grew up in Minnesota and seeing these pictures really brings me back to my childhood,’ ” he said. “It’s really gratifying.”

MINNEAPOLIS  — A retired Minnesota carpenter whom The Associated Press exposed as a former commander of a Nazi-led unit accused... read more