WASECA — A southern Minnesota police officer who was shot in the head has shown small signs in his fight for recovery, his pastor said. 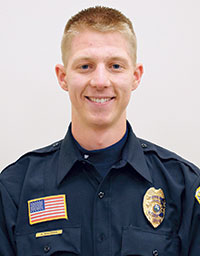 Waseca Officer Arik Matson remains hospitalized in critical condition. Matson was gravely wounded  Jan. 6 as he and three officers responded to a call about a suspicious person roaming backyards in Waseca, a city of about 9,400 located 70 miles (110 kilometers) south of Minneapolis.

Matson’s pastor, Kaleb Hurley, said he has a long road ahead of him, but has responded to questions by squeezing a finger or giving a thumbs-up sign, the Star Tribune reported.

The bullet entered the front of Matson’s head and exited the back, Hurley explained.

Tyler Janovsky, 37, the man accused of shooting Matson and firing at two other officers, has been charged with three counts of first-degree attempted murder. Maston and another officer returned fire, hitting Janovsky twice. He sustained injuries that didn’t threaten his life.

As the swelling from Matson’s head wound subsides, doctors are able to do more tests and caregivers are encouraged by the changes they’ve seen, Hurley said.

Matson, 32, is a husband and father to two young girls.

By Elizabeth Shockman MPR News/90.1 In addition to managing districts with thousands of employees and sometimes tens of thousands of... read more