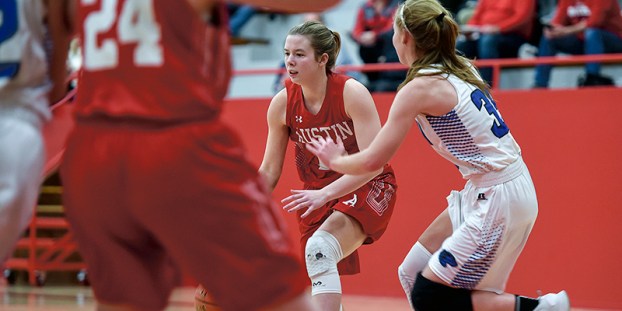 Austin’s Erica Lundberg Works against Owatonna in the first half in Ove Berven Gym. Eric Johnson/photodesk@austindailyherald.com

Give me a break: Packers come back after two weeks off looking strong

Austin senior Kyra Walter has never played quarterback for the Packers, but she sure looked like one as the Austin girls basketball team ran past Owatonna 79-55 in Ove Berven Gym Thursday.

Walters was grabbing rebounds and chucking deep balls to Austin’s bevy of guards, who sprinted the court like they were running fly routes towards the goal line. Walters finished with 11 points, five rebounds, five steals and five assists. 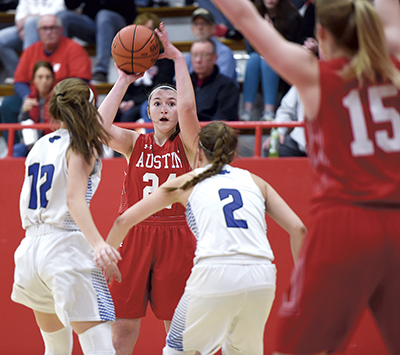 “We’ve all just played together for the last three years and they know if someone’s getting a rebound, at least two guards take off,” Walters said. “We look for each other pretty well.”

After playing 11 games in a month to start the season, the Packers took a two week break before facing off against the Huskies (2-9 overall, 2-6 Big Nine) on Thursday. Colie Justice, who scored 16 points, said the rest was much needed for a team that was feeling a little bit tired before Christmas.

“The break was huge for us, but we’re definitely excited to get back at it,” Justice said. “(Running the fast break) has become automatic for us. We click so well together.” 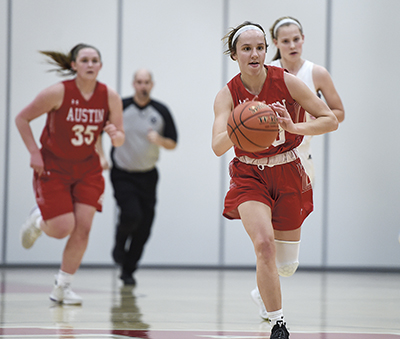 Austin Elyse Hebrink races the ball up the court against Owatonna in the first half Thursday night in Ove Berven Gym. Eric Johnson/photodesk@austindailyherald.com

“The first half was really good. That was some of the best basketball we’ve played in recent memory,” Austin head coach Eric Zoske said. “We’ve proven to ourselves how good we can be for a half and I think we’re still looking to be the best we can for an entire game. Once we find that lead, we’ve got to find that same motor that allowed us to take that lead.”

The Packers have now won five straight games, but they have two big tests over the next four days.

Austin will play Simley (5-2 overall) at 11 a.m. Saturday in Civic Center and it will play at Red Wing at 7:30 p.m. Tuesday. The Wingers (11-0 overall, 7-0 Big Nine) lead the Big Nine and will likely be looking for revenge after the Packers knocked them out of the Section 1AAA Tournament last year.

“They’re two completely different styles,” Zoske said. “Simley is really big and kind of slow and Red Wing is pretty short and really fast. I think we’ll just focus on ourselves and they’ll see if they can beat us, rather than us focusing on trying to beat them.” 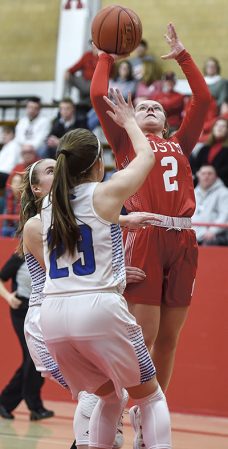 Austin’s Hope Dudycha with a contested lay-up against Owatonna in the first half in Ove Berven Gym Thursday night. Eric Johnson/photodesk@austindailyherald.com