Garold (Gary) Lee Jernberg, 72, of Northwood, Iowa, passed away peacefully on Thursday, Jan. 23, 2020, with family by his side at Thorne Crest Retirement Home, Albert Lea, Minnesota, due to complications from congestive heart failure.

Gary was born March 17, 1947, in Austin, Minnesota, to Harold and Marjorie (Serfling) Jernberg. He had one older sister, GayeAnn. 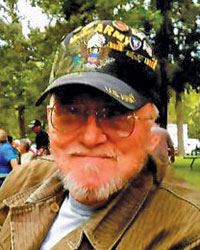 He attended Austin Public schools until he enlisted in the U.S. Army in July of 1966. He served two tours in Vietnam; the first tour was in 1967 and the second was from 1970 – 1971. He then spent six years stationed in Germany. In April 1979, he was honorably discharged. After his discharge and up until July 1984, he enjoyed a career as an over the road truck driver. In July 1984, he suffered a traumatic brain injury after being dragged by his horse. Doctors said he would never function normally again, but he proved all the doctors wrong. In 1988, Gary and his parents moved to Georgia to live with his sister and ended up spending 17 years there. After his sister’s death, he decided to move back to “God’s Country,” as he liked to call, it in 2005 and made Northwood, Iowa, his home by his daughter and her family.

He enjoyed camping over the years with his family and had a great love for animals, especially his puppies. He loved to tinker in his garage and keep his lawn well manicured. Gary’s greatest accomplishment was serving his country as a soldier and defending our cherished right to freedom.

Gary was very proud of his family. His grandchildren were his pride and joy; he always said he wanted to live long enough to see them graduate and get married, even if it meant living until he was 120.

Gary is survived by his daughter and son-in-law, Teresa and Steve Butler of Northwood; grandchildren, Clayton Butler of Lake Mills, Iowa, and Sophia and Isabel Butler of Northwood. He was preceded in death by his parents, Harold and Marjorie Jernberg; and sister, GayeAnn Borgshatz.

A memorial service will be held at 4:20 p.m. on Saturday, Feb. 1, 2020, at Schroeder & Sites Funeral Home in Northwood. Visitation will be held at 3 p.m. until the time of the service on Saturday at the funeral home. Schroeder & Sites Funeral Home of Northwood is in charge of arrangements. Condolences can be left online at www.schroederandsites.com.