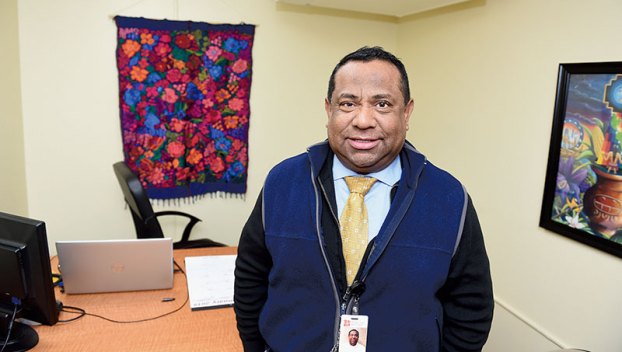 Jose Rivera is photographed last year inside of CLUES in Austin. Rivera is currently waiting on a lung transplant in North Carolina. Herald file photo

Caregiver must be in place before procedure can go through

Anybody who knows Jose Rivera knows of his willingness to help whenever possible. A loud and life-loving personality, you normally heard his laugh before anything else.

Director of CLUES here in Austin, the Honduran native has been a major proponent of helping others as they attempted to assimilated to the United States, but now Rivera himself is in need of help.

Rivera is currently a patient at the Duke University Medical Center in North Carolina, desperately battling against time as he waits for a lung transplant. The hurdle, however; is that Rivera needs a caregiver to be in place before the lung transplant can take place and that is a problem in that Rivera has no family in the United States who can step up and fill that role.

But a group of friends from his church, Primera Iglesia Bautista in Austin, is stepping forward to provide that help. The group is currently looking into first providing a caregiver and then second, funding that caregiver.

“The first three months, the person needs to be there 24/7,” said JoAnn Ordoñez, who along with her husband Victor are helping guide the effort to provide for Rivera. “He will need IV care, feeding tubes … personal needs.”

To help in this regard, the group has reached out to a church in the Durham, North Carolina to possibly help. The challenge remains how the funding of this caregiver will work out in the long run.

“We need to find a hotel for him, support, food, everything,” Victor said. “Everything is going to be a challenge.”

Rivera’s decline began in October of 2019 when he first became ill. He was in and out of the hospital frequently. Rivera became increasingly more ill until he was diagnosed with cryptogenic organizing pneumonia (COP). According to the American Lung Association, COP is a rare lung condition affecting the small airways (bronchioles) and alveoli (tiny air sacs).

Rivera was eventually admitted to the Mayo Clinic in Rochester where he was placed on a ventilator. As his conditioned worsened he was transported in January to Duke for the transplant.

According to a gofundme page that has been set up, Rivera is currently sedated and still on the ventilator, however; there is hope he could receive the transplant as early as next week.

The need to have the caregiver in the hospital with Rivera is a sort of a training, as this person would learn how to care for Rivera after he leaves the hospital following the transplant. Rivera’s recovery could last as long as six months but in reality could stretch out to as long as a year, which contributes to the struggle of funding and supporting the caregiver.

The good news is that this person may have been found. According to Rivera’s longtime friend Miguel Garate, Ismael Garcia Rojas left Wednesday to interview with the social worker attached to the case and hopefully be given the nod as caregiver.

“I will say I’m very happy that his transplant has been approved and now we don’t have to worry about it,” Garate said. “The only thing that we need to worry about is paying for this guy down there.”

In the meantime, Garate and other friends of Rivera are teaming up to take care of bills, car payments and whatever else may need to be taken care of here in Austin.

However, none of his friends have any illusion as to the road ahead.

“This is going to be a long road, a long ride,” Garate said. “The doctors are talking maybe a year before he comes back.”

Garate has known Rivera since 1997 and while the news and situation surrounding Rivera has hit him hard, he remembers his friend in a vivacious light.

“Oh my God, his energy,” Garate said. “His energy was number one. He was always singing and dancing and helping people no matter what. He makes me laugh. He became a part of my life. I miss him like a real brother.”

A gofundme page has been set up to help Jose and the expenses occurred during his illness. To help, go to: www.gofundme.com/f/lung-transplant-for-jose-humberto-rivera

Everything from the licensure requirements of substitute teachers to legislation on what counts as teacher prep time was discussed at... read more