Foodie Throwdown getting back into the ring

The following excerpt is from a letter written by a 24-year-old George Hormel to his mother on Jan. 11, 1885.  As we are in the midst of planning for the ninth annual Foodie Throwdown at the Hormel Historic Home, the letter’s content struck me ironically. Based on his self-proclaimed lack of cooking skills, I am not sure George would have done well in the event, but maybe his mother would have by the way he described her sauerkraut.

“Your sour kraut reached me all o.k. but not as I expected it. I thought you would cook it and then we could warm it over again, and have it taste just as well.  We had considerable fun over it not knowing how to cook it, so I concluded to engineer that part of it, as best I could.  And the first thing I done was to get a fat piece of pork, put it in the sour kraut which we cooked in an iron kettle, and pealed some potatoes which we mashed after they were cooked enough in the kraut and salt pork, after cooking about two hours we put it all on an large platter and had an immense New Years dinner out of it.  It may not have been cooked just exactly right, but I must say, it tasted just like the old home sauer kraut which you used to cook.” (Spelling and grammar copied directly from the original letter.)

The end result for George seemed to be better than he expected it would be.  The Foodie Throwdown theme is “It All Started with Sausage,” and I know our participating chef teams are busy testing recipes.  Figuring out how to incorporate some kind of sausage into their dessert might cause some worry similar to the feelings of George Hormel in 1885, but also like him, the final product is sure to be a crowd pleasing one.

Proceeds from the Foodie Throwdown support the mission of the Hormel Historic Home to preserve and share the Hormel family home and history.  Join us on Saturday, Feb. 15, 2020, for food, fun and history.  Tickets available online or at the HHH office. 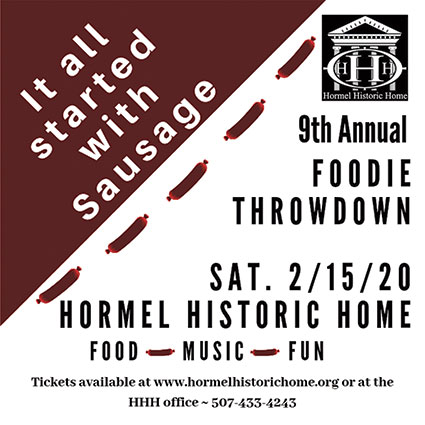 The Wide Angle: Do I really have to do this? The holes aren’t that big

Often times in life, a person just has to step up and be an adult. Despite the overwhelming feeling of... read more