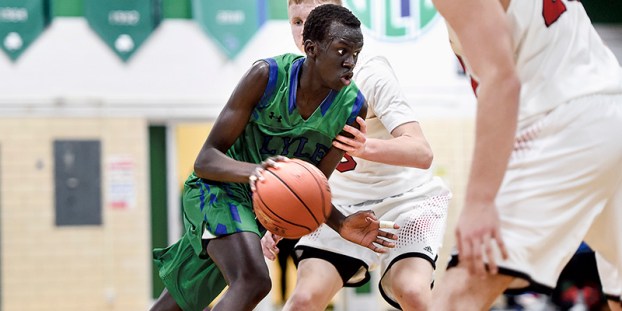 Lyle-Pacelli’s Buay Koak drives into the Spring Grove defense during the first half Friday night at Pacelli. Eric Johnson/photodesk@austindailyherald.com

L-P grabbed its seventh straight win as it beat the Lions for just the second time in program history with a 67-60 overtime victory in Pacelli Gym Friday night.

Zach Bollingberg missed a game-winning put-back at the buzzer for L-P, but he went eight-for-eight at the free throw line to help his team win it in overtime. Six of those free throws came in a one-and-one situation.

“You’ve just got to focus, block out all of the noise and take your time,” said Bollingberg, who finished with 20 points and six assists. “You do that in the gym in practice and it matters most at the end of the game. I put them in and helped my team win. It felt really good.” 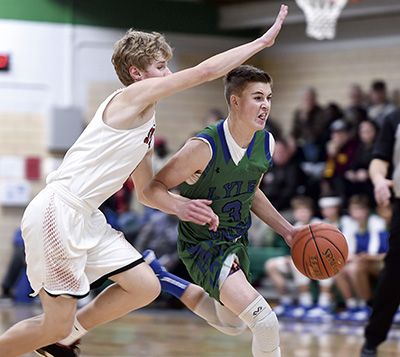 Lyle-Pacelli’s Cole Walter drives off the point during the first half against Spring Grove Friday night at Pacelli. Eric Johnson/photodesk@austindailyherald.com

The Athletics (7-3 overall) lost their first three games of the season, but they have been a different team since that point. Players are finding their roles and the team is settling down in big moments.

L-P (7-3 overall, 4-2 SEC) came into the OT with plenty of confidence as Jed Nelson, who had 19 points and eight rebounds, scored to make it 53-51 and freshman Buay Koak drilled a baseline three-pointer to make it 56-51 with three minutes left in the game.

Not afraid to attack the rim against the Lions (5-4 overall, 4-2 SEC), Koak finished with 15 points.

“I’ve been playing against older people since sixth grade. This year, I’ve stayed calm and done what I have to do. I’m not trying to do other people’s jobs. I’m just doing what I have to do,” Koak said. “The gym was packed tonight and it was crazy. I remember being in junior high and watching them play Spring Grove. It was kind of unreal to be out there tonight.”

L-P had just five turnovers on Friday as Cole Walter controlled the pace, while dishing out six assists. Mach Diang, who had nine points and four rebounds, hit a three to put L-P up 41-39 in regulation.

“Different guys stepped up and not everybody played their best game, but the biggest thing is guys stepped up. I’m proud of these guys. We could’ve done a lot of things when we started 0-3. We could’ve folded up, but instead we worked harder on defense. We’re getting better and we’re playing with composure,” L-P head coach Scott Koenigs said. “Buay plays like he’s been there forever. He doesn’t play like a ninth grader and he’s a heck of a ball player.” 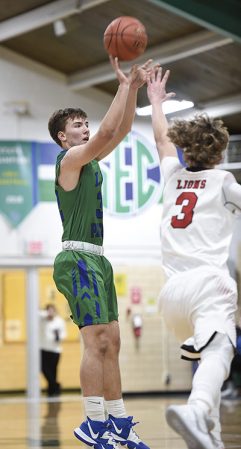 Lyle-Pacelli’s Jed Nelson takes a jumper over Spring Grove’s Caleb Nerstad during the first half at Pacelli. Eric Johnson/photodesk@austindailyherald.com

Bollingberg said the Athletics have long forgotten about the slow start and they’re ready to focus on the present.

“We’ve come together and everybody is kind of going into their role. We’re finally starting to click,” Bollingberg said. “I feel like we could be dangerous. It feels like to get one against Spring Grove. We don’t get many because they’re such a powerhouse.” 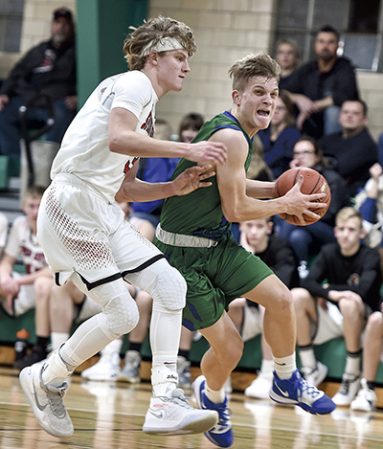 Lyle-Pacelli’s Zachary Bollingberg angles toward the net against Spring Grove’s Caleb Nerstad during the first half Friday night at Pacelli. Eric Johnson/photodesk@austindailyherald.com