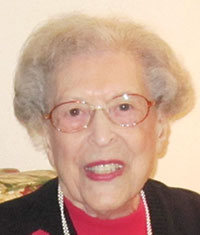 Eleanor was born on July 16, 1920, in Pittsburgh, Pennsylvania, the youngest of 10 children to parents Phillip and Francesca Catalano, immigrants from Sicily who came to the United States via Ellis Island in search of a better life for their family. Her father was a partner in the Catalano Purpura Fruit Company, now part of the history of the Strip District in Pittsburgh.

Eleanor graduated from Carnegie Mellon University (then Carnegie College) and began her career as a systems analyst at Standard Register.  She resigned her position to marry Robert Arthur Montigney from Cleveland, Ohio, on Sept. 9, 1950.  Bob’s job with Hormel Foods took them from Akron, Ohio, to Milwaukee, Wisconsin, and finally to Austin, Minnesota, in 1966. Bob passed away April 27, 1990.

Playing Bridge was her favorite activity; she continued playing even after she moved to Prior Lake, Minnesota, to be closer to her daughters. She never stopped remembering her Bridge and Art & Travel Club friends from Austin.  She was an active volunteer at St. Edwards Catholic Church for many years.

There will be a private memorial service a t a future date at McNearney – Schmidt Funeral Home in Shakopee, Minnesota. Interment will be in Calvary Cemetery in Austin. Condolences can be sent to the family at mcnearneyfuneralhome.com. The family requests no memorials.