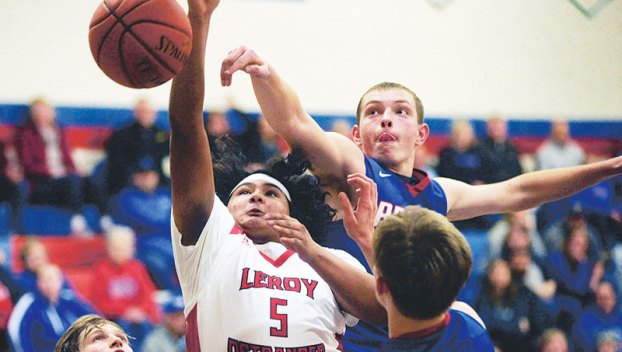 ADAMS — The Rebels had to use a little bit of a twin connection to beat LeRoy-Ostrander 79-77 in Adams Thursday.

When it comes to communication on the court, Southland twin brothers Nick Boe and Dan Boe are second to none. So maybe Nick was feeling a little bit psychic when he didn’t run back on defense with his team trailing 75-74 with 30 seconds left, or maybe he was just lucky.

Either way, it paid off as Nick ended up with a lay-up that turned into a three-point play to put the Rebels up 77-75 with 10 seconds left after his brother Dan blocked LeRoy-Ostrander’s Dakota Stoopes on a shot in the paint. 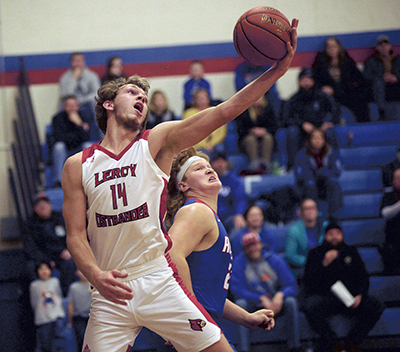 “We didn’t get what we wanted on our last try and I tried to get an easy one down at the end,” said Nick, who finished with 15 points, 10 rebonds and five assists.

Dan’s blocked shot was his eighth of the game and he also added 12 points, three assists and two steals. Despite being undersized against L-O’s Riley Olson, who poured in 29 points and grabbed 12 rebounds, Dan held his own in the paint for much of the night.

“You can’t go for the fakes and when they go up, you’ve got to match it by going straight up,” Dan said.

The Cardinals (6-9 overall) missed four free throws and three field goals in a row in the final minute of the game as things slipped away from them.

“We had a lot missed opportunities. We missed bunnies and we missed foul shots,” L-O head coach Justin Stevens said. “They’re a good team and we knew we had a battle on our hands. The bounces didn’t go our way. They play a tough Three Rivers schedule and they’re banging around every game. These are the games that prepare you for tournament time.”

Harrison Hanna gave the Rebels (7-5 overall) a big first half boost and he finished with 12 points, seven assists and seven steals. The Rebels led by as many 13 in the first half after tailing 8-2 to start the game. 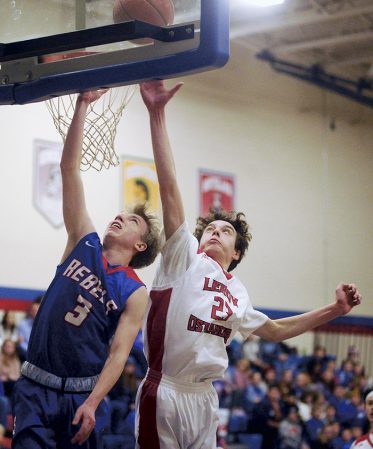 Southland’s Harrison Hanna goes up for a lay-up against Levi Royston of LeRoy-Ostrander in Adams Thursday. Rocky Hulne/sports@austindailyherald.com

Blooming Prairie boys get past Cobras