A California man was arrested on Sunday after allegedly attacking the driver of a vehicle in which he was a passenger. 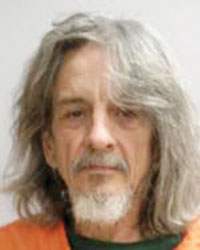 According to Mower County Sheriff Steve Sandvik, Mower County deputies and Austin police officers assisted the Minnesota State Patrol with a call of an accident at about 10:31 a.m. on Sunday at mile marker 188 in the eastbound lane of Interstate 90. Three people were in a 1986 Toyota SUV with California license plates that had rolled over in a ditch. Two individuals, the 58-year-old female driver and a 51-year-old male passenger, were outside the vehicle when law enforcement arrived. A second male passenger, Ronald Frank Rodello, 61, of Lake Port, California, was still in the vehicle.

The Rose Creek Fire Department also responded to the scene.

When Rodello exited the vehicle, he started to walk away and was stopped by deputies. The driver and passenger said Rodello was in the backseat when he became angry with the driver, with whom he had a prior relationship. They said he choked and head-butted the driver, causing her to lose control of the vehicle and roll over into the ditch.

Rodello was arrested and cited with misdemeanor domestic assault – commits act to cause fear of immediate bodily harm or death. He pleaded not guilty during his first court appearance on Tuesday.

A hearing for Rodello has been scheduled for Jan. 27.

There were no injuries reported from the accident.

Man charged with strangling woman during argument; Said alleged victim punched him in the face