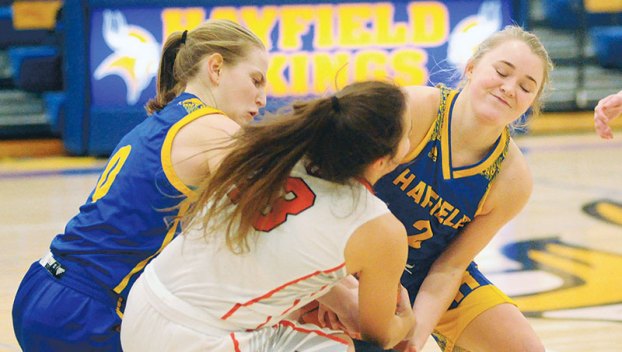 Defensive domination: Hayfield holds Burros in check for much of the night

The only drama in Hayfield gym on Monday night was whether or not the Vikings would allow any second half points to Lanesboro.

The Burros did finally score when Sophie Pieper converted a post move with just 43 seconds left in the game, but it didn’t put a damper on the Vikings, who won 66-26.

Hayfield (5-7 overall) needed a little nudge to get going early in the game as head coach Kasey Krekling called a timeout and took out his entire starting lineup while his team was leading 12-11 early on.

The Hayfield starters watched as Hayfield’s back-ups brought energy to the table. Eighth-grader Natalie Beaver came in and scored nine of her 11 points in the first half and finished the game with 10 rebounds.

“I think we have to give props to our bench,” said Hayfield senior Cela Carney, who had 11 points and three steals. “They really went in and showed us what was up. They brought all of the energy and they pushed 100 percent. Sometimes you really need that little sit down and think about it moment. It really helped us.” 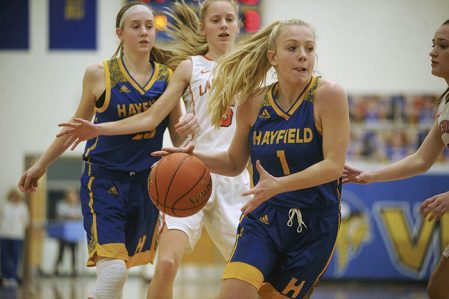 Caitlynn Hendrickson controls the ball for the Vikings in Hayfield Monday. Rocky Hulne/sports@austindailyherald.com

The Burros (6-7 overall) pulled to within 20-19 when Payton Benson scored in the first half, but the Vikings held a 46-7 advantage for the rest of the contest.

“I think we kept our intensity on defense way higher in the second half,” said Hayfield senior Lila Gronseth. “Sometimes our offense isn’t there and we’ve really relied on our defense this year.”

Beaver has improved with every game this season and so has her classmate and fellow eighth-grader Kirsten Watson, who had 15 points, four rebounds and five steals Monday.

“They always bring energy to practice,” Carney said. “Just playing with them makes us better and they’re grown so much this season.”

Gronseth, a senior, has enjoyed playing with Hayfield’s youngsters this season.

“They’re fun to play with,” Gronseth said. “They’re young and they bring a different kind of talent to the team.” 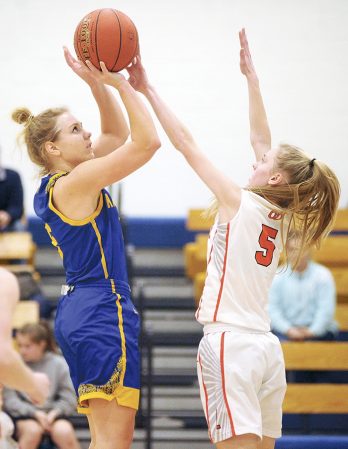