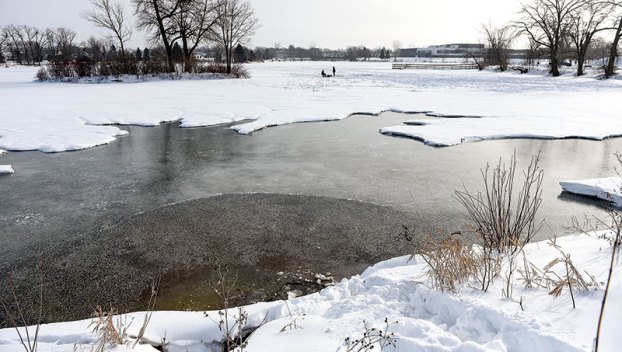 Anglers fish a couple hundred feet from a now frozen over hole in the ice that was the result of the YMCA dumping its pool from the old site earlier in the week. Photos by Eric Johnson/photodesk@austindailyherald.com

A number of different groups including the Minnesota Pollution Control Agency are looking into an incident earlier this week surrounding the draining of the YMCA’s swimming pool at the old site.

On Wednesday, anglers on Mill Pond alerted the Mower Soil and Water Conservation District in regard to a patch of open ice on the pond’s west side and the strong smell of chlorine after holes were drilled into the ice.

It was determined that open ice was connected to  the YMCA draining its swimming pool as operations were being moved to the new YMCA  at the Austin Community Recreation Center.

The CRWD alerted the public through a Facebook post out of concern for angler safety on the thinning ice.

“The main concern was the public safety side,” said CRWD Outreach Coordinator Tim Ruzek. “We didn’t know where this warmer water was coming into it. We were definitely concerned with the water quality as well and the possible affects on aquatic life. It looked strange this time of year.” 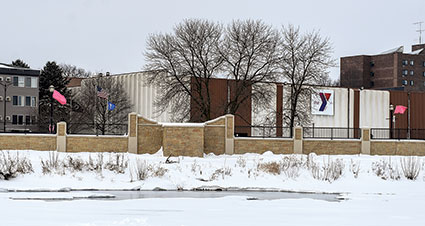 A gap of previously open ice on Mill Pond has now frozen over. The patch of ice was opened after the YMCA building dumped its pool water earlier in the week.

Both the MPCA and the Minnesota Department of Natural Resources were alerted to the situation and were investigating.

A form provided by the MPCA indicated that 122,600 gallons of chlorinated water was emptied from the pool that impacted the Cedar River through Mill Pond.

A release from the YMCA said: “On Wednesday, Jan. 29, the YMCA at the Austin Community Recreation Center, was contacted by Mower Soil and Water Conservation District alerting us to reports of chlorine aroma emanating from Mill Pond.

We are fully cooperating with Mower SWCD and the Minnesota Pollution Control Agency as they investigate the matter. The health and safety of everyone in the Austin community is a top priority for Y of Austin. We are gathering the facts and as we have more information, we will share it with the community.”

The MPCA report indicated that the pool draining started Monday morning and finished at noon on Tuesday. The YMCA reported to the MPCA that the draining is done annually during the summer, but were draining it for the move.

According to the MPCA website, “Chlorination must be stopped several days in advance of discharging pools. Allowing the water to age without chlorine addition enables the chlorine to dissipate.”

The site goes on to say that three to four days is sufficient and that “It is recommended that swimming pool water, free of chlorine, be discharged to the ground surface (i.e. lawn). The discharge should be directed onto a vegetated surface to encourage filtration.”

Best Bets: Take the plunge at East Side Lake

The Paint the Town Pink celebration continues on with another weekend of festivities. One of the biggest money makers of... read more