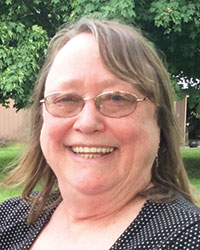 Bonnie was an adventurer. She joined the military when she was still a girl, acquiring Top Secret clearance at only 18 years of age. She traveled with the carnival, working her own “Break 3” booth on the county fair circuit. She rode a motorcycle, she drove a semi truck (probably one of few women to do so at the time), and she loved Janis Joplin and Bonnie Raitt, Janis Ian and Kris Kristofferson, and most of all Willie Nelson. The photo of her standing next to Willie was one of her most prized possessions. She had a pyrotechnic license and conducted fireworks displays for Fourth of July celebrations in southern Minnesota and northern Iowa for a number of years.

Bonnie herself was a firecracker of a woman who believed women could – and should – do anything they wanted to do. She did.

She was fiercely independent. She was also incredibly caring and compassionate; when she saw a scruffy wet biker stalled on the side of the road in the rain, she had to stop to offer help and shelter. That’s how Bill Rasmussen became her husband, her soul mate, and the love of her life. Bonnie and Bill loved riding and were members and officers of the Flatlanders Chapter of ABATE of Minnesota. The organization holds raffles twice a year, and in one of them Bonnie held the winning ticket for a Harley-Davidson Electra Glide, a bit of a step up from Bill’s Knucklehead.

When Bonnie eventually settled into a “normal” job, her job was to help other people get jobs: young people, displaced people, people with learning disabilities, people with prison records, and perhaps her favorite, military veterans. Her compassion drove her career.

Bonnie made fast friends everywhere she went, whether it was southern Illinois, Colorado, or anywhere else she called home. She was loyal and generous. She enjoyed baking and barbecuing. Another hobby was beading; she made intricate and beautiful Christmas ornaments. Socializing and playing cards at the “Broken Spoke” with neighbors was a common occurrence. Every week she looked forward to playful, but enthusiastic, competition during Tuesday Night Trivia at Buckley’s in Walters, Minnesota. This was the first Christmas in maybe 25 years that she didn’t make her famous homemade caramels and other treats and distribute them to every man, woman and child in Walters. She was a Walters icon.

Bonnie had a million freckles and sparkling blue eyes. When she learned of her illness, she colored her faded red hair bright purple (think Vikings) in defiance. She relished spirited debate. She said exactly what was on her mind and was not afraid to apologize when she crossed the line, as sometimes she did. She was bold that way.

It shouldn’t be a surprise that Bonnie lived and reveled in life and time with friends and loved ones for more than a year past her “expiration date” of pre-Christmas 2018. She left the world as she lived: On her terms. Completely. Like a boss.

Bonnie was preceded in death by her parents; her father-in-law, Duane Rasmussen; and her devoted husband, Bill, whom she adored and greatly missed. Bonnie is survived by her mother-in-law, LaVonne Rasmussen; a sister, Betty (Bob) Peach; nephews, Bobby and Gene; niece, Cheryl, whose visits she treasured; brothers-in-law, Chris and Steve (Jacque) Rasmussen; cousins; and many cherished friends.

Many thanks to Bonnie’s hospice team, and especially to Becky Akkerman, without whom Bonnie’s last year would have been much different.

Bonnie wanted a party, not a funeral. A date has not been determined. Bruss-Heitner Funeral Home in Wells, Minnesota, is assisting the family. To leave an online condolence, please visit brussheitner.com.