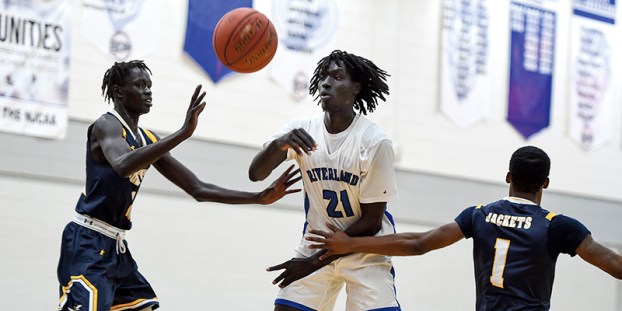 Riverland’s Nyagoa Obany fires a pass to the corner during the first half against Rochester Community and Technical College. Eric Johnson/photodesk@austindailyherald.com

Austin grad Nyagoa Obany has proven he can battle on the boards and protect the rim, but he showed he can do a lot more for the Blue Devils as No. 10 ranked Riverland Community College beat Rochester Community and Technical College 93-83 in Riverland Gym Wednesday.

Obany threw down a thunderous breakaway jam over an RCTC player that gave RCC a 48-41 lead with 13:20 left in the game and he added back-to-back lay-ups down the stretch to give RCC an 81-73 lead with two minutes left.

“Today was a really big game, we had to have energy and I just felt like I had to step up today,” Obany said. 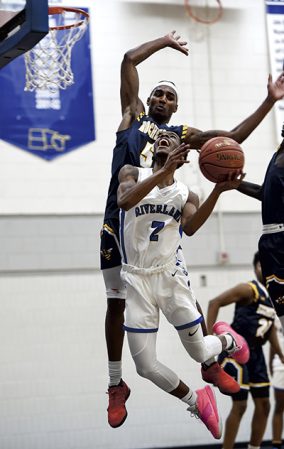 Riverland’s Deandre Anderson goes in for a contested lay-up during the first half against Rochester Community and Technical College Wednesday night at Riverland. Eric Johnson/photodesk@austindailyherald.com

Obany finished with 10 points and 11 rebounds.

Terrrell Smith didn’t score in the first 12 minutes of the game for RCC, but he finished with 20 points, five rebounds, three assists, two steals and two blocks.

“We just had to get it to the bigs, feed it to them. We went into them and when they doubled them, we had open shots. Obany had a big dunk and that turned us up, that’s probably what pushed us to the lead,” Smith said. “We hadn’t beat (RCTC) in awhile. They got one on our home floor last year that why we weren’t supposed to get. This one felt really good.”

The Yellowjackets (12-4 overall) opened the game on an 11-0 run, but the Blue Devils slowly clawed back. RCC took a 37-33 lead into halftime after Smith connected on a deep three-pointer and it never trailed in the second half. 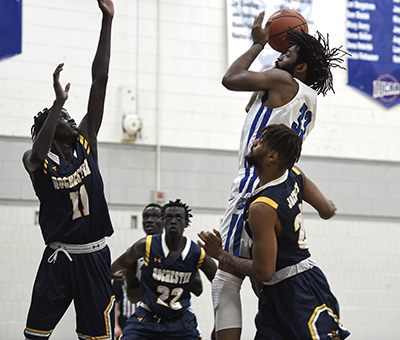 Riverland’s Keanan Butler shoots under pressure in the first half against Rochester Community and Technical College. Eric Johnson/photodesk@austindailyherald.com

“We trust in this group and we think they’re pretty good,” said Riverland head coach Derek Hahn, who has now beaten RCTC four times as a coach. “I think this group will continue to excel and get better as time goes on. (RCTC) is a team that goes on run with the aggressive defense that they play. When they get out to a big lead, you’ve just got to stay even keel.”

RCC showed its depth in the win as multiple players had strong stretches, but Obany’s energy was a constant factor that gave the Blue Devils the edge in the paint. Headed into Wednesday’s game, Obany led the nation with a field goal percentage of 76.2.

“His motor is incredible. Every time there’s a shot taken, he has a chance for the rebound because he’s so long and athletic,” Hahn said. “He doesn’t need to 20 shots to impact the game. He does a lot of different things for us and he’s a versatile defender.”

Montrell Jacobs had 18 points and seven rebounds for RCC (15-1 overall) and Deandre Anderson had 18 points — including a stretch where he made eight straight free throws to ice the game. 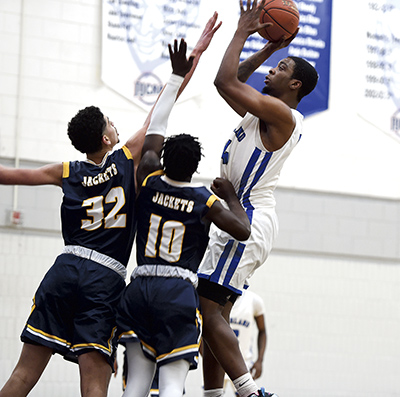 Riverland’s Ibrahim Mohammad shoots over the defense in the first half against Rochester Community and Technical College. Eric Johnson/photodesk@austindailyherald.com

The Austin Packer dance team will get the rare chance to showcase what it has in front of its home... read more