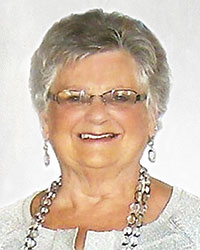 She was born Aug. 5, 1933, in Fargo, North Dakota, to Willard Balthazor and Lenore (Halberg) Balthazor. She grew up in Watertown, South Dakota, and graduated from Watertown High School in 1951. Audrey married her childhood sweetheart, Henry Deblon Jr., on Jan. 17, 1953. Shortly after, they moved to Austin, Minnesota, where they raised their children. Audrey worked at Red Owl Grocery Store in Austin for 15 years.

In 1979, Henry’s job moved them to Winona. Audrey went to work at Ted Meier Drug in Winona until she was able to fulfill her life-long dream of becoming a registered nurse. In 1981, after her youngest child graduated from high school, she enrolled in Southeast Technical College in Winona. She received her LPN degree at Southeast Technical College in 1982 and started working as an LPN at Winona Health in Winona while continuing on to get her RN degree from Western Technical College in LaCrosse, Wisconsin, in 1986 at the age of 53. She worked her entire career at Winona Health, something she was extremely proud of, and retired after 20 years at the age of 70.

She was adventurous, never afraid to try something new and earned the loving title “Sergeant Aud” because of her feisty demeanor. Her curiosity took her all over the world and led her to learn everything from woodworking to oil painting to playing the harp. Audrey made an impact on every person she crossed paths with. She was a friend, a confidante, and a mentor to people of all ages. Many considered her family.

Audrey is survived by a son, Joe (Carlene) Deblon of Austin; daughter, Julie (Mike) Biggerstaff of Winona; grandsons, Jared (Robin) Sanvick of Austin and Riley (fiance Callie Seylar) Deblon of Des Moines, Iowa; granddaughter, Sarah (AJ) Scherbring, of Minnetonka, Minnesota; great-grandsons, Logan Sanvick, Owen Scherbring and Alex Scherbring; sister, Billie (Bill) Lekvold of San Diego, California; and many loving nieces and nephews. Audrey was preceded in death by her husband of almost 61 years, Henry; and three children, Tracy (died 1992), Kim (died 1995) and Jeff (died 2005). Audrey will also be united with three infants whom she never had a chance to meet who are buried in Austin.

A funeral Mass will be at 11 a.m. on Saturday, Jan. 25, 2020, at St. Mary’s Catholic Church in Winona with the Rev. Michael Cronin officiating. Visitation will be from 9-11 a.m. on Saturday at the Visitation Commons of St. Mary’s Church. Interment will be at St. Mary’s Cemetery in Winona. In lieu of flowers, the family has established the Audrey G. Deblon Scholarship for non-traditional nursing students at Western Technical College Foundation, 400 7th St. N., La Crosse, WI 54601. Donations may also be directed to Winona Health Hospice. Services entrusted to Fawcett Junker Funeral Home and Crematory of Winona and Fountain City, Wisconsin. Words of sympathy and remembrance can be given at www.fawcett-junkerfuneralhome.com.