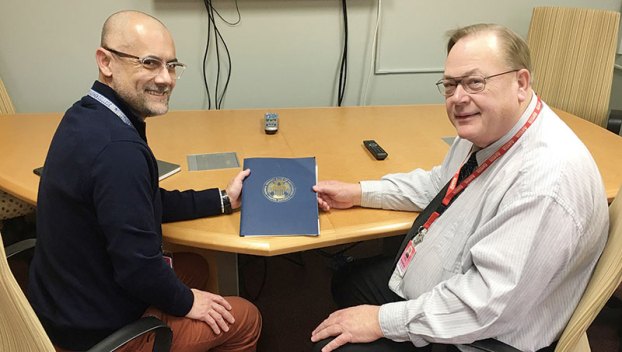 Austin Public School District leaders like John Alberts, executive director for educational services, left, and Superintendent David Krenz are continuing to see how a proposed constitutional amendment making a quality education a right for all children in Minnesota plays out. Tyler Jensen/tyler.jensen@austindailyherald.com

On the issue of a proposed amendment to the Minnesota State Constitution that would make a quality public education a right for all children, leadership at Austin Public Schools is taking a wait-and-see approach.

Before the proposal, made by former State Supreme Court Justice Alan Page and Minneapolis Federal Reserve President Neel Kashkari, becomes the law of the Land of 10,000 Lakes, Superintendent David Krenz said, like all legislation, there is a long way for it to go.

“Only about 1 percent of what they (the State Legislature) talk about gets enacted,” he said.

In order for an amendment to be made to the state constitution, it needs to pass both the State Senate and House before going to Minnesota voters. There, a majority all voters must approve of the plan, not just those who choose to vote on the amendment.

Even if the amendment is ratified, it is still only rhetoric until funds are approved to take action or other work is done, Krenz said.

“We can make it a constitutional amendment, we can make it one of the 10 Commandments, but unless someone is willing to take action, nothing is going to happen,” he said.

He points out that in law, the federal government has committed to providing special education funding that it is not currently funding.

John Alberts, executive director for educational services at Austin’s School District, is interested in seeing that this proposal partly came from the Federal Reserve. Having the national bank talking about the issue and how it relates to the achievement gap makes it something to pay attention to.

He and two other officials from the district attended a packed meeting in Minneapolis, Jan. 13, to learn more about the proposal.

Alberts said he is still skeptical about how changes to the constitution would be reflected at the local level.

Currently, the Constitution talks about an adequate and uniform system of public education in the state, which for some at the meeting is not what they are aspiring for.

“No one ever really aspires to an adequate education,” Alberts said.

The thought from organizers and supporters of the proposal is that having a right to a quality education be part of the state’s constitution would force policies facilitating this to be adopted, Alberts added, going on to say that Minnesota is one of the few states that has not updated its constitutional language on education at some point.

However, there are still reservations from some about the language.

“What is quality? Who gets to define quality?” Alberts asked.

One concern people have had is whether that question would be answered by lawsuits, with people suing districts or the state because their child has not received a quality education according to them.

There are already such lawsuits going around, with people saying their children are not getting an adequate education, Alberts said.

A way to test students to see if they are getting a quality education would need to be found.

For internal use, the district measures a student’s growth three times a year, seeing how much they have learned since their last evaluation.

If this is adopted, Alberts said there is more than one area that will need to be measured, whether it is how the student has improved, what their standardized test score is and how they are doing emotionally.

For Krenz, the biggest thing that needs to be done is for resources to be used to create an environment where kids can thrive and Minnesota is not there yet.

One of the most important things for this is community engagement that Austin is lucky to already have.

“We’re able to garner resources a lot of districts don’t have,” Krenz said.

The community support Austin has is not something he has seen in every other district he has been with.

One thing that may come from this discussion, whether the amendment is passed or not, is to raise the issue of the need for community engagement, Krenz said.

Until then, he and other members of the district will continue to see how this issue plays out.

Mower County is working with the Minnesota Department of Public Safety Emergency Communication Networks division (DPS-ECN) to learn the cause... read more