The Bureau of Criminal Apprehension’s DNA lab in St. Paul is a highly controlled area. You need permission to even enter the building, much less get into the lab.

And to do that, you need to put on a face mask and sanitary gown.

“When we started doing DNA testing, it wasn’t nearly as sensitive as it is today,” said Catherine Knutson, the lab’s director and head of forensic sciences for the BCA. “In order to get a DNA profile, we would’ve needed a stain or a bloodstain, or something like that, that was probably about the size of a quarter, so pretty significant. As technology got more sensitive, we’re now able to test things that you can’t even see.”

Minnesota has played a major role in developing the national system that uses DNA to link crime scenes to other crime scenes or to known convicted offenders.

It all started 30 years ago with a batch of 900 DNA samples from sexual assault crimes in Minnesota. Those samples were tested and logged as part of an FBI pilot program, together with samples from several other states. The idea was to create a database of DNA samples from crime scenes and convicted offenders that could be searched. 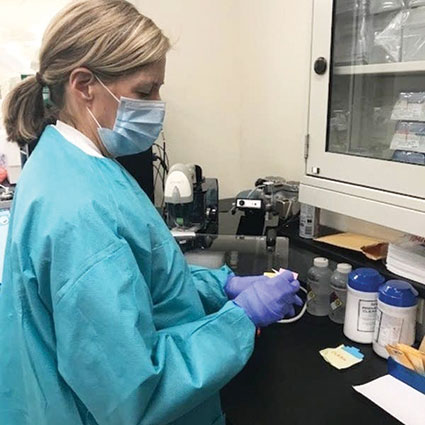 It didn’t take long for law enforcement to start seeing results from that first batch of 900 DNA samples. Within just a year or two, the BCA got its first in-state hit, linking a homicide in Minneapolis to a sample from that original batch of DNA evidence.

“It takes that power of computing technology and brings them together and really makes an incredibly powerful tool.”

The number of investigations aided by the Combined DNA Index System, or CODIS, has grown exponentially since that first breakthrough. In 2019, more than 1,000 Minnesota investigations were aided at least in part by a CODIS hit. And then there are the hundreds of thousands of cases in the rest of the United States.

It’s technology that’s been used to solve not only today’s crimes, Knutson said, but unsolved crimes of the past.

What started 30 years ago with a few hundred DNA samples, focused on identifying perpetrators of criminal sexual assault, has grown into an index of almost 20 million profiles. That index has led to hundreds of thousands of solved murders, burglaries and sexual assault crimes. It has also helped authorities identify remains.

“It can be very impactful to public safety in identifying individuals who are wreaking havoc on society,” Knutson said.