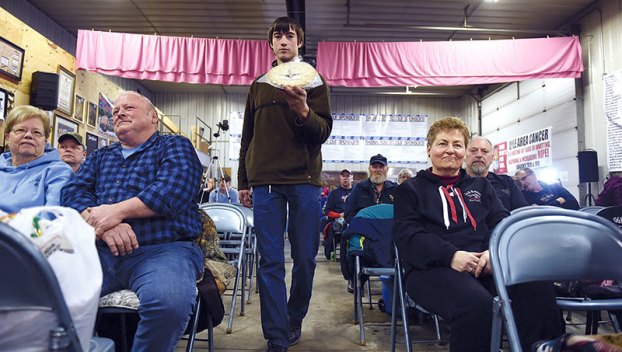 Wilson Shirk parades a freshly made pie for auction between two of the bidders, Mike McCabe and Roberta Ransom during the Lyle-Area Cancer Auction last year. Herald file photos

By now, anybody who has either been involved with the Lyle Area Cancer Auction or been to the auction will recognize some of the major milestones it has achieved over the past 40 years.

Well, get ready for another one as year 41 will be celebrated as the year the LAC reached the $3 million raised milestone.

The LAC has become a main event show every January in Lyle and to fully appreciate the storied history of the little event that could, all you have to do is look at the last few years.

But it was 2015 when the big $2 million mark was reached and what’s been crazy is how the LAC made that milestone and how the upcoming $3 million will be reached.

Every year exceeds expectations in the eyes of organizers as Ricke can often be heard saying, “If you raise a dollar, you’ve succeeded.” However, he is also cautioning that this year’s effort might be down a bit from previous years because some events that happen throughout the year couldn’t happen as some of those organizers became ill with the very thing they were fighting to cure — cancer.

What it does, though, is prove just how much cancer touches everybody and continues to affect even as people strive to battle it.

“Every year is different,” Ricke said. “Every year you find out a different story. Someone is always touched.”

As an example, many at this year’s LAC will feel the loss of Dave Yerhart, who passed away just last year after his long battle with brain cancer.

The former owner of Y Waste Removal, Yerhart was heavily involved with the LAC and his absence will be felt by many said Ricke, who was a good friend of Yerhart. 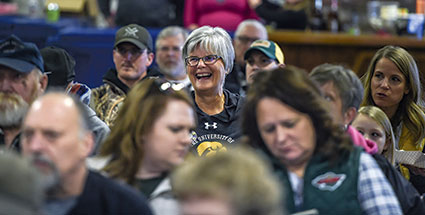 But while those who lost their battle with cancer will be on the minds of so many, there will still be plenty to celebrate over the two days, which will be Friday and Saturday, next weekend.

And on the forefront will be the auction itself.

“We get your pies and pickles and everything else under the sun, of course,” Ricke said. “We get stuff every year, some of the stuff we don’t even know about until we get it.”

Among the bigger items that will be up for bid will include a $5,000 gift certificate from Overby Orthodontics as well as the deeds for four cemetery lots at Grandview Cemetery that will most likely be split into two for each.

Not only is there the auction, but there are other popular events going on as well including the 20th annual Lucille Johnson Pool Tournament going on in Carpenter, Iowa today. While the pool playing slots are taken up, people can still head down to watch and take part in other activities, including a gun raffle at the Carpenter Community Center.

As the money is collected over the two days and then donated to the Eagles Cancer Telethon on Sunday, one thing has been increasingly clear over the four decades of fighting cancer.

It never ceases to amaze what people can do when rallying together.

“It’s crazy. It’s nuts, it really is,” Ricke said. “It’s absolutely crazy. It’s remarkable what people do and what people give. It’s unbelievable. Everybody has been touched by cancer.”

When the announcements at Grand Meadows School came on Monday, students heard the tune to the movie “Mission Impossible,” giving... read more