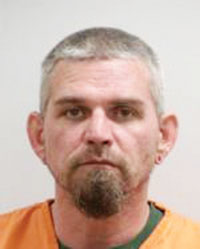 According to the court complaint, police were dispatched on a report of stolen wheels at about 1:27 p.m. on Dec. 2 in the parking lot of Runnings in Austin. The victim, an adult female, reported that she had parked her vehicle, a 2007 Dodge Caliber, in the Runnings parking lot at about 10 a.m. and left the location in a friend’s vehicle. She later received a text from Eklund that read, “So when do you plan on coming back to runnings (sic) to get your car…” He then swore at her and called her a name in the text message.

She told police that her driver side wheels were missing when she returned. She also said Eklund had been “stalking” her by following her around and that he drove a blue 2010 Ford F250 pickup truck.

Police reviewed surveillance video from Runnings and observed Eklund’s Ford pull into the parking lot at about 10 a.m. and park near the victim’s Dodge. Eklund then exited his truck, stopped at the Dodge, and then went into the store, where he appeared to be looking for the victim. He then left the store, walked back to his Ford, and then back to the Dodge before returning to the store, where he purchased a tire jack. Footage then showed Eklund return to the Dodge, remove the wheels, and place them in the back of his truck before driving away.

A review of Eklund’s criminal history shows a prior conviction for assault.

Eklund will appear in court again on Dec. 23.

Gift a membership to the Friends of the Jay C. Hormel Nature Center

By Kevin D. Nelson Austin Parks and Recreation Are you looking for a gift for that person that has everything? You... read more