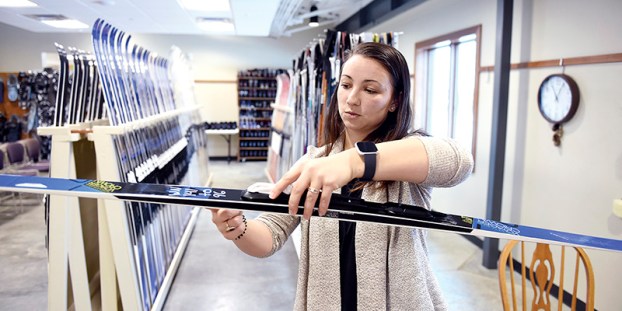 Sydney Weisinger points out some of the ninnovations to the new cross country skiis the Jay C. Hormel Nature Center has purchased. Eric Johnson/photodesk@austindailyherald.com

In an effort to continue to offer one of the best cross country skiing experiences in the area, the Jay C. Hormel Nature Center has started replacing its existing supply of cross country skis and boots that can be rented from the nature center.

The move was made for a variety of reasons including general maintenance, specifically because of the bindings, manufactured by Soloman SNS, where the skier’s boots are placed on the ski. 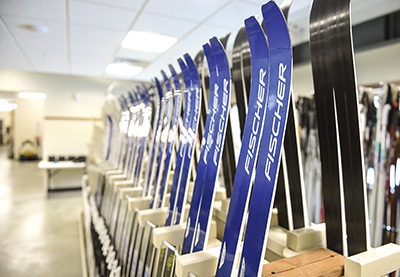 “We knew that Saloman SNS, they were not making the bindings anymore,” said teacher/naturalist Sydney Weisinger. “It was common knowledge in the skiing world and that they were going to NNN.”

The current skis have a new locking mechanism that is different from the mechanism that had boots click into place on the nature center’s old skis. It made maintenance on the old skis impossible because they just didn’t have the necessary parts anymore.

But at the same time, it worked well with replacing skis that had seen plenty of use over the years.

Many of the skis were over two decades old as Director/Naturalist Luke Reese had told her he had used many of these when he was in high school.

“Luke told us once that he had been using these when he was renting,” Weisinger said. “So some of these are 20, 30 years old.”

During that time the old skis had also been used by the sixth-graders of Austin that visited the nature center field trips over the years. That’s around 400 sixth-graders in one year alone, so years of this had taken its toll.

Many of the skis no longer had much of a camber, the middle of the ski that’s bowed to allow for easier gliding. With that bow gone, it’s harder for the skis to glide.

There are new advantages to the skis as well and they include blunted tips, easier matches to people and an underside that doesn’t require as much wax for upkeep.

The blunted tips prevent the skis from being caught up in branches and long grass under the snow. The skis are easier to match now because they don’t require the old way of raising an arm above the head and checking to make sure the ski tip reached the wrist. 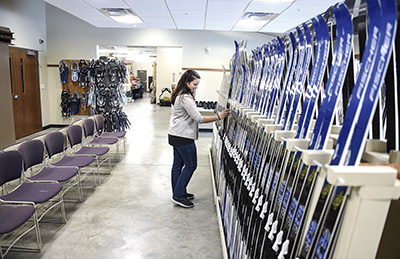 Now they are matched to the person based on weight.

Lastly is the upkeep on the under side of the ski, usually requiring glide wax and kick wax. While glide wax is still used for the back and front thirds of the skis to help with movement over the snow, Weisinger said it really only needs to be applied once a season now. Whereas kick wax is usually applied to the base of the ski and presents the grip on the snow that helps the skier propel forward; however, on these new skis there are vertical and horizontal grooves that serve as somewhat of a replacement for this, though kick wax can still be applied.

Weisinger said that this first step is only the beginning.

“In the future we would like to replace all of our skis and all of our boots,” she said. “But buying in bulk is still very expensive.”

While the purchase of the skis is exciting for the nature center, for the time being they will remain inside the Interpretive Center. Mild temperatures and melting snow have made trails off limits to both skiing and snowshoeing.

“We have a lot of trails that are very patchy,” Weisinger said. “We need six inches of snow before we can even pack the snow and it can’t be fluffy and light snow. It needs to be wetter and thicker snow.”

Snowshoeing requires the same amount of snow, but that doesn’t mean people can’t be on the paths.

For many turning 21, reaching the milestone age is a cause for celebration. On Dec. 21, 1944, Robert Potach celebrated... read more