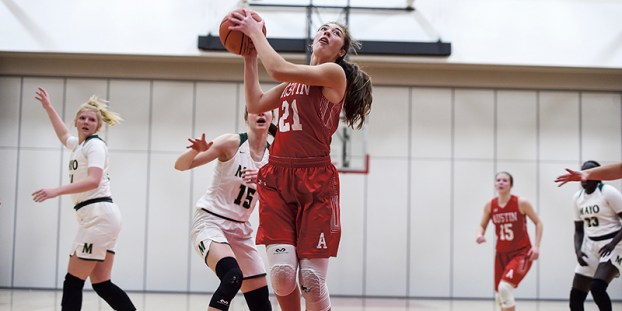 Austin’s Reana Schmitt takes the pass cutting inside against Rochester in the first half Tuesday night in Ove Berven Gym. Eric Johnson/photodesk@austindailyherald.com

The Austin girls basketball team struggled with Rochester Mayo’s size throughout the second half as it had a six-game winning streak snapped in a 68-61 loss in Ove Berven Gym Tuesday.

Mayo did most of its damage behind the post play of Nancy Soro and Anna Miller, a 6-foot, 3-inch forward, who also was a force in the paint on defense.

“They have two big and experienced post girls and they did give us some issues, but it was no surprise,” Austin head coach Eric Zoske said. “These girls have played them for a really long time and these girls play with each other in the summertime on the same AAU teams. We know each other really well.” 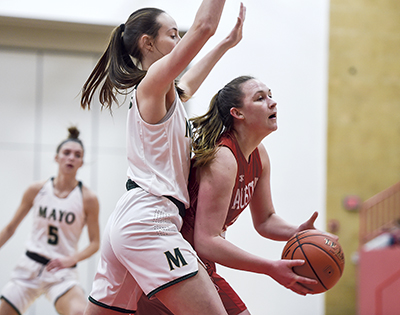 Austin’s Kyra Walters moves to dish under the pressure of Rochester Mayo’s Anna Miller during the first half Tuesday night in Ove Berven Gym. Eric Johnson/photodesk@austindailyherald.com

The Packers were hoping to spread the floor out and top Mayo with their shooting, but Austin connected on just six threes and it missed nine out of 16 free throw attempts.

“The game plan was for our guards to hit free throws and hit some shots. When you go 7-for-16 on free throws, odds are you’re not going to win these close games,” Zoske said. “We’re a 70 percent free throw shooting team normally and we didn’t shoot as well on three-pointers as we have been.”

Austin senior Kyra Walters had 17 points, 10 rebounds and three steals for the Packers and she created a number of opportunities for the Packers down the stretch on second chance shots and transition looks.

“That’s something I’m really proud of with our team. We never give up and we always go hard, whether we’re up by 20 or down by 20. We always give 100 percent. We knew we were losing, but we knew we could comeback,” Walters said. “We played a bigger team tonight and it was more of an inside outside game. We were looking for threes, but were intimidated in the first half. In the second half we came out better, but we just needed to shoot more threes.” 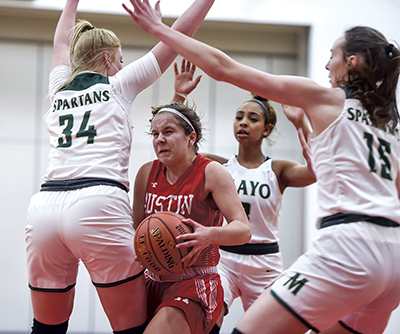 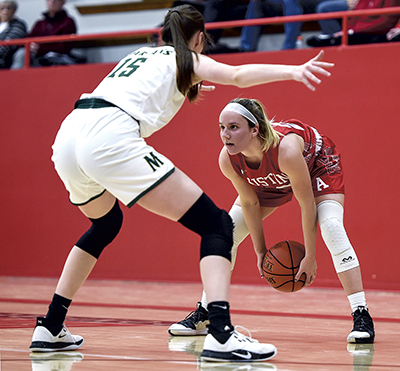