Minnesota backers of guaranteed time off with pay to care for dependents view a new federal offering as a signal the ground has shifted politically behind their cause.

Come October, federal government workers who welcome a new child through birth, adoption or foster care will be eligible for 12 weeks of paid parental leave. It’s a benefit that was included in a giant end-of-year bill that sailed through Congress and won President Trump’s signature last week.

While the measure was scaled back from an initial version that contained other paid leave options for family health situations, the new law is considered a landmark change. Congressional Democrats who advocated for it found a powerful ally in first daughter and presidential adviser Ivanka Trump. 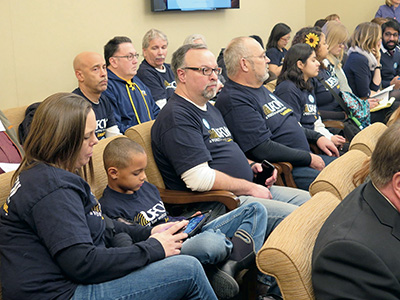 “The White House made a good move on this,” Walz said in an interview. “They had bipartisan support, and it’s going to be smart. And I hope now that helps build some momentum.”

Walz has endorsed a push to require all Minnesota employers to extend paid leave in response to a new child, a close relative’s serious illness or an active-duty military family member being deployed.

“It makes a good difference,” he said. “It strengthens our workforce. It builds stronger families. In the long run, it grows the economy.”

The plan got through the DFL-led Minnesota House earlier this year but stalled in negotiations with the Republican-led Senate.

“It certainly will turn the heat up in Minnesota, but I’m always very wary of what we’re trying to put on the private sector in particular,” he said.

Gazelka, an insurance agent from Nisswa, said it’s one thing for an employer like the federal government to manage a leave plan given its two million workers. Expecting those with fewer employees to do the same is another, he said.

The debate hasn’t put all businesses on one side or the other. Some Main Street business owners say they’d welcome a system where they could pay into and allow their workers to draw from a state-administered leave fund.

The Minnesota Chamber of Commerce counts 2,300 business members of varying sizes. It has pushed back against the leave plan.

“This is one of the most, if not the most expansive leave proposals in the country because you can stack different types of leave together,” said Laura Bordelon, the chamber’s senior vice president for advocacy.

The premiums that would be borne by businesses are a problem, Bordelon said, but so is the prospect of backfilling staff ranks during extended leaves.

“We’re already facing a very serious workforce shortage,” she said. “So they can’t imagine where else they would find workers to fill the slots that would be opened by folks on leave.”

“The fact that federal employees have this benefit indicates it is a growing issue and it’s an expectation that more Americans and Minnesotans should be able to access programs like that,” he said.

The paid-leave issue will come to a head one way or another next year — at the Capitol or on the campaign trail, Winkler said.

“We hope that Republicans will be more open to it this year. It seems doubtful that they will be,” he said. “And we expect this to be an issue in the election and hope Minnesotans deliver a set of legislators who are ready to stand up for their economic security.”

By John Enger Christmas is over, which means thousands of Christmas trees across Minnesota are nearing the end of their... read more