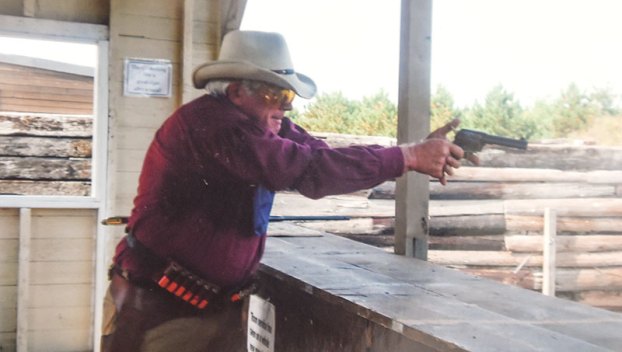 Reach for the sky: Local man brings in hardware as cowboy action shooter

Sam Pickett might be the fastest draw this side of the Mississippi River — or at least that’s what a midwest championship would represent.

Sam Pickett is the alias for Rodney Friedrich, a cowboy action shooter, who just captured the championship at the Midwest Regional Gunsmoke earlier this year at Ahlman’s Gun Shop in Morristown, Minnesota.

Cowboy action shooting is exactly what it sounds like, a competition based on the Old West and the gunslingers of old. This championship is Friedrich’s second midwest championship in just under 20 years of shooting competitively. 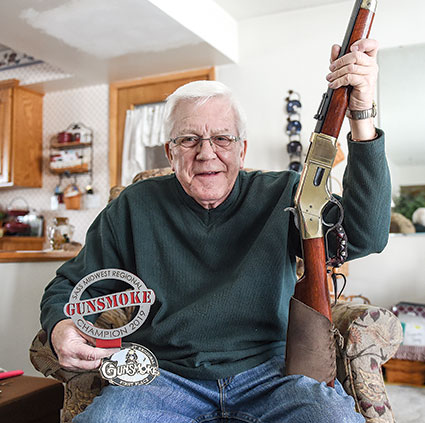 Rodney Friedrich poses with his Winchester 1866 replica rifle and his midwest regional championship trophy, which he won earlier this year. Eric Johnson/photodesk@austindailyherald.com

The competition encompasses a variety of shooting types, including different kinds of firearms all with an historical aspect to it.

“There are different things you can shoot,” Friedrich explained. “I shoot traditional, but there are some that use black powder.”

Friedrich started his run as cowboy action shooter in 2001 after seeing an ad for it in one of the western themed magazines he subscribes to. Friedrich bought his guns and holsters and in 2002 started entering competitions, slowly and steadily working on time and accuracy.

However, it took getting some pointers from other shooters before Friedrich really started making progress.

A lot of that advice was simple things he could do with his hands or different techniques in his shooting. 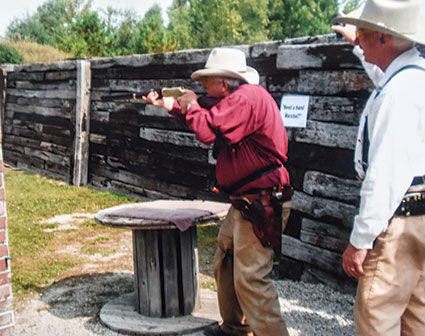 By 2010, he claimed his first shooting title for his class of Elder Statesman and in 2015, he claimed his first Midwest Regional Title. In 2016 and 2017, he finished in the top five in the Cattle Baron class, garnering a second-place finish in 2017, where he missed out on the title by just 1.53 seconds.

In 2018, he was third and this year he looked to be heading to a second place finish, but like a lot of aspects to cowboy action shooting, there is a story to tell.

Following the two days of shooting, Friedrich and his wife were attending the competition banquet, where he received his buckle for second place, but afterwards, when they were heading home, someone called out Friedrich’s name.

“As my wife and I were leaving we heard someone calling out — it was the guy who had given me my buckle,” Friedrich explained. “He said, ‘give me that buckle’ and so I said ‘okay.’ He explained there had been a ‘computer glitch and the guy who had won it wasn’t even shooting in your class. You came in first.’” 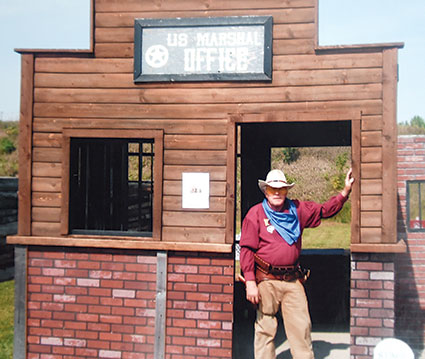 Rodney Freidrich has his picture taken at a shooting location at the Gunsmoke cowboy action shooting competition. Photo provided

The actual competition takes place within an Old West setting at Ahlman’s Gun Shop, including shooting stations like a jail and train.

And to make it more authentic, people dress like their 1800s counterparts and use replica firearms from the period. Friedrich owns three .45 caliber six-shooters, one of which is a black powder six-shooter he doesn’t compete with. He also owns a replica double-barrel shotgun, with shorter muzzle length especially used on stagecoaches, and a Winchester 1866 rifle replica.

Friedrich and others who shoot try to go the extra distance to replicate the time period, down to the dress. Friedrich himself has five different outfits and even once tried to purchase a historical rifle from the 1800s.

“I tried to get an original rifle that I found and the guy in California said he would sell it to me for $20,000,” Friedrich chuckled. “I said no thank-you.” 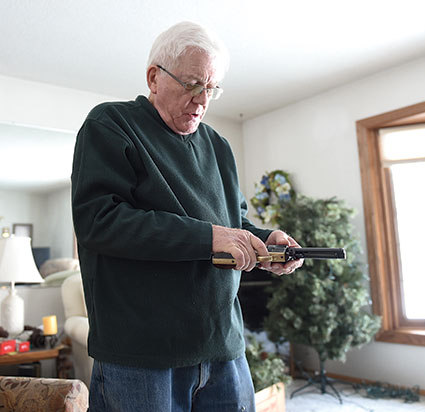 Rodney Friedrich shows off one his .45 six-shooters he uses in competition. Eric Johnson/photodesk@austindailyherald.com

The shooting itself is broken down into stations with shooters separated into posses, with rules for each grouping of targets, regulating how many shots must be placed where, attempting to add as much challenge as possible.

During the summer, Friedrich tries to get as much shooting in as possible, spending the first and third Saturday of each month in Morristown and the third over in Holmen, Wisconsin, as well as spending time at the Cedar Valley Conservation Club outside of Austin.

He estimates he fires over 4,000 rounds over the summer, while in the winter months, he spends his time reloading spent cartridges, numbering between 4,000 and 4,300. He also spends time working on speed, setting up a station in his basement using blanks.

Friedrich said he likes the atmosphere of the shoots and the people that go along with it.

“It’s fun and you get to meet so many people,” he said. “They don’t know you from siccum. They just know your alias.”

Hormel Historic Home to tell one Dickens of a tale

One reason I love my job is the varied day to day areas of responsibility. A typical day includes facility... read more