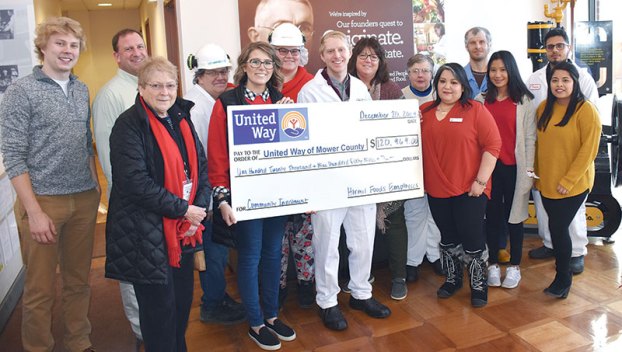 Hormel Foods employees, the United Way of Mower County and organizations which receive funds from the United Way to do work in Mower County gathered Friday for the presentation of a check for $120,969 from plant employees. Tyler Jensen/tyler.jensen@austindailyherald.com

With the Hormel Foods plant employee fundraising campaign for 2019 over, nearly $121,000 is making its way to the United Way of Mower County.

In total, Hormel Foods Plant employees raised $120,969 to invest in local programs that create change in the areas of health, education, financial stability and basic needs, the United Way said in a press release.

The money raised from workplace campaigns like this one connect employees with the community and allow them to support causes important to them, the organization said.

“Helping raise funds for the United Way is an honor knowing the money raised by the Hormel employees stays here in the county to help those in need with a wide array of both basic necessities and emergency relief services through the United Way partner programs,” Richard said.

Two partner programs, Mower Council for the Handicapped, which advocates for and helps people with disabilities, and the Austin Welcome Center, which helps people who have recently arrived to the United States, Were at the check presentation on Friday.

United Way staff do not decide what gets funded and instead rely on panels made up of donors and members of the community, Lanke said. Those who wish to join those panels are invited to contact the United Way of Mower County.

Plant Manager Clint Walters said the donations made by the employees is inspirational.

“I don’t think our employees understand just how much they inspire others around them, myself included,” he said.

Lanke said seeing the huge donations made by employees of Hormel Foods is overwhelming in the best way.

Heading into the holiday season, conservation officers from the Department of Natural Resources are reminding all snowmobile riders to make... read more