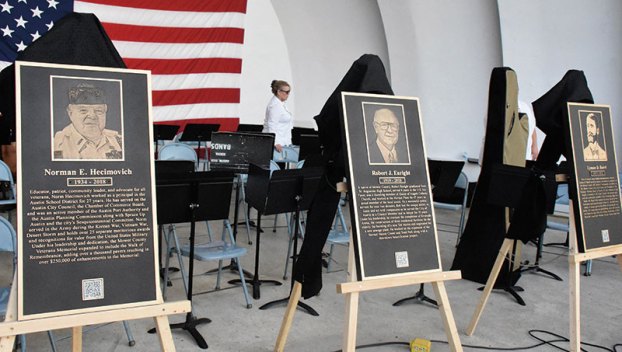 Commeorative plaques were unveiled for the 2018 inductees of the Pillars of the City during Freedom Fest. Herald file photo

Pillars of the City Committee seeking plaque nominations through Dec. 31

The Pillars of the City Committee is still seeking nominations from the general public of individuals they believe should have a plaque on the flood wall pillars on North Main Street.

Nominees are individuals, both past and present, who have made significant contributions to Austin via growth, economic impact, health, education, culture, recreation, communications, business or scientific innovation.

“It’s important that people realize that community nominations are the key to this program,” said Austin City Clerk Ann Kasel.

Each year, the committee unveils inductees during Freedom Fest in July.

There are currently 15 pillars on the flood wall:

• Richard L. Knowlton – former president of Hormel Foods and chairman of the Hormel Foundation board;

• Gary Ray – former director of Hormel Foods and chairman of the Hormel Foundation board;

• Dr. Richard J. Schindler – former member of the Minnesota State Ob-Gyn board, YMCA Board and Minnesota Opera Board

More information on the current pillars can be found at www.ci.austin.mn.us/boards-commissions/dedicated-pillars.

A copy of a submission form can be found at www.ci.austin.mn.us/Pillars Application.pdf.

No injuries reported Law enforcement is looking for information after a report of shots fired Thursday night. According to Austin... read more