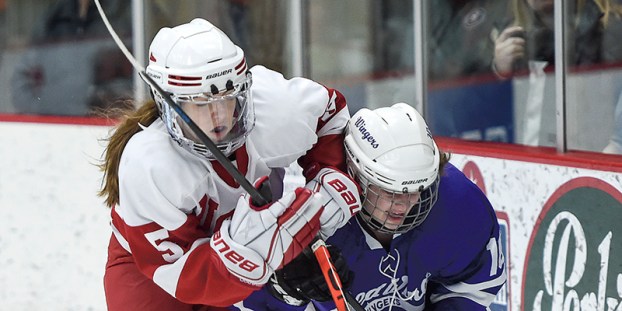 Austin freshman Sarah Wangen has gained a new perspective on hockey these past couple of weeks, but she was back in her familiar role as the Packers defeated Red Wing (4-10-1 overall, 4-3-1 Big Nine) by a score of 5-1 in Riverside Arena Thursday.

Wangen plays wing, but she had filled in at goalie in three straight losses for the Packers and she held opponents to less than five goals in those games. Wangen learned to look at the game from a different angle while setting in between the pipes.

“A big part of being goalie is that you have to watch angles and I saw them a little bit better in the net,” Wangen said. 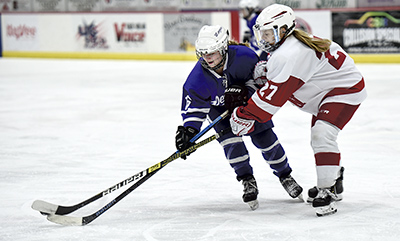 On Thursday, Wangen was able to get back to doing what she does best — skate hard and skate fast. Wangen had an assist on a goal by Jordyn McCormack that made it 2-0 early in the second and Wangen put the Wingers away when she scored a breakaway goal to put Austin up 4-0 with 2:10 left in the second period.

“I definitely felt lighter and I was really excited to get back on the ice,” Wangen said. “I was feeling good tonight. We have everybody back and we saw what we can do when everybody is in the position that suites them best.”

Austin junior Shelby Davidson made her season debut in net for the Packers as she stopped 26 of 27 shots. Wangen said she was happy to be in a supporting role for Davidson.

“Its a lot different playing in net,” Wangen said. “It was a good feeling for me being out and trying to help my goalie instead being in the net tonight.”

The Packers are nearing the halfway point of their season and having the goalie position shored up could make a huge difference as the team looks to make a turnaround.

Kate Holtz, a sophomore, had a short-handed goal, an empty net goal and an assist for Austin. She said the team is ready to make a run, now that it’s full roster is back in the lineup.

“It’s sort of like a relief for us,” Holtz said. “We relied on Sarah a lot (in net), but now we have her on ‘D’ and she’s such a good player. Shelby is so great in net. She’s fluid and she moves side to side so well. Everything is just so amazing. We’re looking to get back on all of the teams we may have lost to in the past.”

Austin head coach Troy Holtz said that this is the team he thought he would have at the beginning of the season. He thinks that the return of Davidson will make the Packers (4-7 overall, 3-6 Big Nine) much more competitive.

“The missing piece all year has been Shelby. This team going forward, I think is going to surprise a lot of teams. Having Shelby back is double impact because I get her back and I get our main defenseman back in Sarah,” Troy said. “(Sarah) had great vision tonight and she wasn’t throwing the puck. She put her head up and she saw the play.” 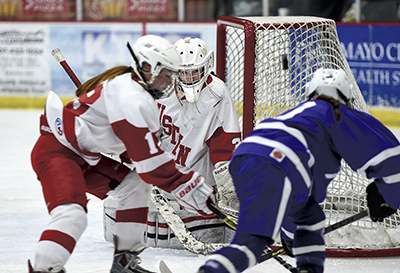 Austin goalie Shelby Davidson watches the action pass her by as she defends the net in the second period Thursday night in at Riverside Arena. Eric Johnson/photodesk@austindailyherald.com

Austin girls roll past the Bears