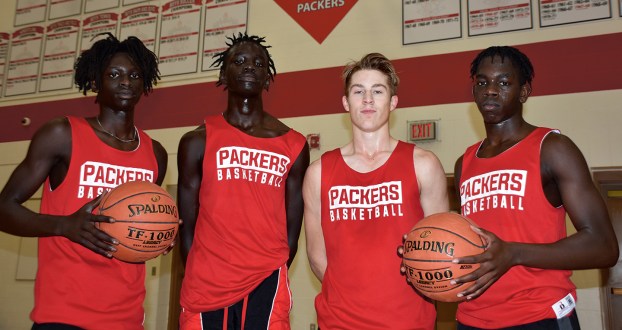 From left, Austin’s Agwa Nywesh, Ogur Gari, Teghan Hovland and Okey Okey have all stepped up their game for the Packers this winter. Rocky Hulne/sports@austindailyherald.com

The Packers were fresh off a pair of wins over Class AAAA powers Lakeville North and Apple Valley and a day away from New Year’s Eve and the intensity in practice was as high as ever in Packer Gym Tuesday afternoon.

Agwa Nywesh squared up a defender for a fade-away three, Ogur Gari kicked a small chair in playful frustration after having his shot blocked, Teyghan Hovland was ripping down rebounds and Okey Okey was doing what he does best — knocking down shot after shot.

With the bulk of last year’s team gone to graduation, Austin (7-1 overall) had a lot of question marks heading into this season, but the Packers are beginning to have the familiar look for a program that has played in six of the last eight state tournaments.

“I like the trajectory of this team. We’ve got a chance to be pretty good by the end and hopefully we will be,” Austin head coach Kris Fadness said. “The game at Owatonna (tonight) is going to be a tough one and we have to be ready to go. After losing to Mayo, we can’t afford to slip up again if we want a conference championship. You try to stay in the moment and focus on what you can do today.”

Nywesh has embraced the role as the team’s go-to scorer and self proclaimed hype man. The agile and explosive point guard isn’t just a force on the court, he also stands out when he’s not competing. Nywesh has been known to show up to AHS boys soccer games dressed as a giant soccer ball and he’s loving his senior season with the Packers.

“Being born and raised here, this is where it’s at and this is where I want to win a state championship. I feel I have to pay Austin back for everything it’s done for me,” Nywesh said. “We’re starting to see a potential state-bound team. We just have to work on some things to get to our goal.”

As Nywesh has drawn the attention of defenses, he’s made a habit of dishing the ball off to Okey, a junior, who has big-time range from beyond the arc. Okey didn’t play a minute of varsity basketball last season, but he’s had no trouble stepping in and stepping up.

“Our chemistry works very well and that’s why we’re a good team. When the point guards kick it out and I’m wide open, I’m going to shoot it every time,” Okey said. “If I make a mistake, those (older) guys come through and get me through it.” 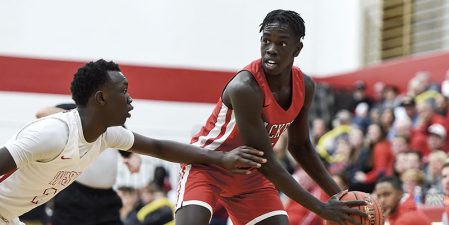 Okey Okey against Mankato West’s Buom Jack on the wing during the first half this season. Herald File Photo

The Packers, who are ranked No. 3 in QRF, have learned to share the ball in recent weeks and the team is finding it’s groove. Hovland, a junior who has made the jump from role player to leader this season, has seen a lot of growth from his teammates — especially in senior center Ogur Gari, who didn’t play any varsity basketball last season.

Gari has already made plenty of high-light blocked shots off the backboard that have drawn big reactions from crowds across the Big Nine and he’s developing into a potent shooter on offense.

He looks to continue to strive towards improvement this season.

“I’m adjusting, but it’s been fun. I had to improve on my defense, my shot and just learning to communicate. I learned a lot from Teyghan,” Gari said. “He brings a lot of energy and he’s always talking. I try to take stuff from him and put it to my game. He’s a good leader.”

The Packers may have a tradition of winning over the last decade, but that doesn’t mean they are guaranteed anything when they take the court. Fadness said the focus is always on improving.

“We’re getting better together and we still have to continue,” Fadness said. “We still have a ways to go.”

Nywesh isn’t going to let this season end without a fight.

“Once we get going, we’re a very hard team to stop,” he said. “Once the crowd gets going and the intensity picks up, it’s over from there.”

Salma Masood is a senior captain on the Austin Packer Dance Team. Q: What sports do you compete in? A:... read more