A University of Minnesota feature

Set against the cold morning sky, the warm red of Mars and its stellar counterpart Antares lends a note of cheer to the January darkness.

Mars begins the year as a glimmering red dot somewhat low in the southeast, above Antares, the heart of Scorpius. Day by day, the stars of Scorpius approach and sweep past Mars. Between the 6th and 9th, the three stars known as the Crown of Scorpius sail by the red planet. Earth’s orbital motion is pushing both Mars and the stars of Scorpius westward, but the stars outstrip Mars because the planet, moving eastward in its own orbit, is able to slow its drift. 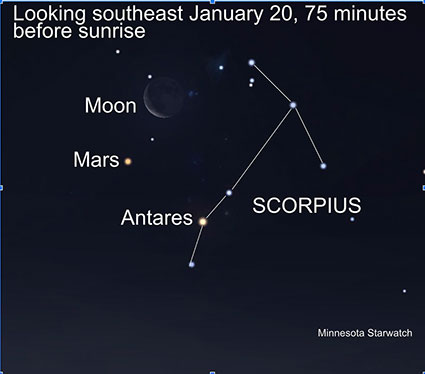 Before Scorpius gets too far west, we have a good chance to compare Mars to gigantic Antares, the red star whose name means rival, or antagonist, of Mars. The star and planet come closest on the 18th, when they’ll be 4.8 degrees apart, with Antares to the lower right of Mars. Mars and its rival are now of comparable brightness, but Mars is slowly cranking up the wattage. A waning crescent moon hangs above the pair on the 20th.

Jupiter breaks into the southeastern morning sky late in the month. Saturn follows, but won’t be easily visible until February. Both planets will rendezvous with Mars before winter is over.

In the west, Venus dominates the early evening sky. As the month goes by, Venus climbs toward the slightly dim, ring-shaped Circlet of Pisces. Above the Circlet,  the Great Square of Pegasus is now tipped as it heads into the sunset, along with the Circlet and other autumn stars. On the 27-28, a waxing crescent moon appears with Venus.

January’s full moon arrives at 1:21 p.m. on the 10th, just a few hours before rising for the night. It travels the night sky near the Gemini twins Pollux (the brighter) and Castor.

Earth reaches perihelion, its closest approach to the sun in an orbit, on the 5th. At that point we’ll be 91.4 million miles from our parent star. We in the Northern Hemisphere can feel lucky that perihelion happens during winter, because the nearer the Earth is to the sun, the faster it moves along in its orbit. That means it moves through the fall and winter part of its orbit faster than it moves through the spring and summer part. As a result, the Northern Hemisphere gets about five more days of spring and summer than does the Southern Hemisphere.

The University of Minnesota offers public viewings of the night sky at its Duluth and Twin Cities campuses.

Check out astronomy programs, free telescope events, and planetarium shows at the U of M Bell Museum: www.bellmuseum.umn.edu/astronomy