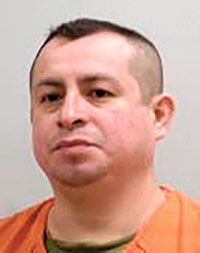 A charge of felony first-degree criminal sexual conduct-wsexual penetration-victim under 13 was dismissed at the sentencing.

Court documents state a Mower County detective received a child protection intake report from the Department of Human Services regarding a 10-year-old girl on June 28, 2018. The girl reported that Lopez-Velazquez touched her when he drank.

The detective, an Austin police officer and a child protective services employee met with the girl on June 29. She told them that while she was in bed, Lopez-Velazquez had placed his hand in her pants and touched her in a sexual manner. She then told her babysitter about the incident.

Law enforcement interviewed Lopez-Velazquez, who called the incident “an accident.” He said “nothing happened” and that they were “playing in the bed” when “accidentally my hand touched her in that area over (the victim’s) clothes.” He indicated it happened six months prior and that his finger may have gone up the victim’s shorts, but that he did not touch her sexually.

Law enforcement spoke to the victim’s mother, who said the victim told her about what happened. When she confronted Lopez-Velazquez about it, he said he might have “accidentally” touched her vaginal area over her clothes.

Law enforcement then spoke to the victim’s babysitter, who said she had come over to babysit the day the assault took place. She said the victim started to cry and told the babysitter’s 9-year-old daughter that Lopez-Velazquez wanted to have sex with her. The victim then said Lopez-Velazquez had rubbed his penis over her vaginal area over her clothes.

In addition to jail time, Lopez-Velazquez must spend 25 years on probation and follow 30 conditions, including registering as a predatory offender. He must also pay $10,585 in fees. Failure to follow the conditions could result in 36 months in prison.