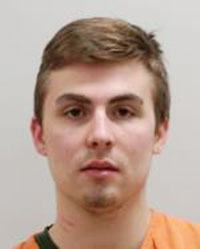 According to the court complaint, a Mower County deputy met with a woman at 1:27 p.m. on Wednesday at the Mower County Law Enforcement Center who reported Lerum had damaged her vehicle, a 2010 Jeep Patriot. She also reported he had assaulted her during the early morning hours at a residence in Lansing.

She reported that she and an adult male were in a bedroom on the second floor of a residence in the 53000 of 269th Street in Lansing when Lerum “barged in” and immediately began assaulting her and the male. She indicated Lerum punched her several times, hurting her upper right arm, and that the assault lasted for about a minute before the male gained control of Lerum and made him leave the residence.

She did not discover damage to her vehicle until the morning. She said she and a male relative returned to a residence she shared with Lerum to collect her property. While they were there, Lerum returned and apologized for the damage.

The deputy photographed damage on the  Jeep’s front fender, driver’s door and the trunk area. He then contacted the victim’s male relative, who confirmed he heard Lerum apologize for damaging the vehicle and said Lerum offered to pay for the damages.

The deputy then spoke to the male victim, who said Lerum burst into his bedroom at about 12:30 a.m. or 1 a.m. on Wednesday. He said his home was unlocked and that Lerum entered without permission and began “swinging,” punching him in the face. He indicated Lerum struck the female victim, causing her to cry out in pain.

He then said he was able to get control of Lerum by holding him down by the throat. He told Lerum he would call the police if he did not leave, then escorted him out of the house. He indicated Lerum returned to the residence a short time later and was yelling that he wanted to fight him.

The deputy observed a small knot above the male victim’s right eye.

Deputies located Lerum at his residence in the 53000 block of 254th Street in Lansing Township. Lerum attempted to close the door and retreat into the residence, but was caught and arrested. He declined to speak about the incident. Deputies photographed injuries to Lerum’s neck and on his hands and knuckles.

Lerum will appear in court again on Jan. 2.