Man charged after allegedly threatening others with knives; Was heavily intoxicated at time of arrest 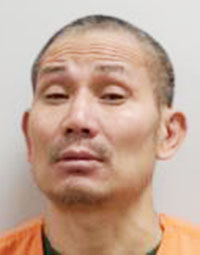 According to the court complaint, police were dispatched at about 1:17 a.m. on Saturday to the 300 block of Second Street Southwest. They made contact with Lay, who was exiting the apartment, and a man and woman in the apartment.

The woman said she was visiting her boyfriend and that Lay resided with him at the apartment. She said they had been drinking and that she told Lay he needed to stop drinking because he was too intoxicated. Her boyfriend tried to hide the liquor, which made Lay angry. She said her boyfriend gave Lay the bottles, but he was still angry and grabbed a knife. She alleged Lay approached them with the knife and said something to the effect of “I want to die.” She and her boyfriend then locked themselves in the bedroom and called police.

An officer spoke to the woman’s boyfriend, who said Lay needed to “control his drinking” because when he gets drunk, he got “like he is tonight.” He said Lay threatened them with two knives after he tried to hide the liquor from him. He alleged Lay told them, “I’m not afraid to die and I’m not afraid to kill people.” He and his girlfriend then locked themselves in the bedroom. He said Lay attempted to get into the bedroom and he was concerned Lay would “cut us.”

He showed police the knives; one was a large machete and the other was a medium-sized folding knife with an orange handle.

Police then spoke to Lay, who was heavily intoxicated. He said he was upset with the woman and her boyfriend because they tried to take away his alcohol and he needed to sleep. He indicated they were upset with him because he went into their room and woke them up. He denied threatening them with knives.

Lay submitted to a preliminary breath test, which showed a blood alcohol concentration of 0.198 percent.

Lay will appear in court again on Dec. 30.

WASHINGTON — As the U.S. House of Representatives prepares to take a historic vote on the impeachment of President Donald... read more