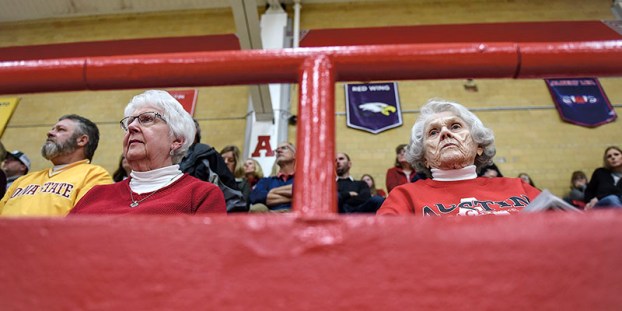 Loving the game: Overby and Ostergaard are fixtures in the stands

The Austin boys and girls basketball teams gained a lot of fans when they each  went to the Minnesota Class AAA State Girls Basketball Tournament last season, but very few of those fans have supported the Packers for as long as Dolores Overby and Flo Ostergaard.

The seats at center court in Ove Berven Gym might as well be engraved with the names of Overby and Ostergaard as they have held down the seats on a nightly basis for nearly a decade. They’ve also been seen in Packer Gym for boys game over the same period of time.

“We’ve missed a couple of games, but not very many. If the weather is too bad, we don’t go,” Overby said. “Both of us are basketball fans. The only thing good about winter for me is basketball.”

Overby, who is 85-years old, and Ostergaard, who is 91 years-old, are both widows, building a strong bond over time as next door neighbors for nearly 15 years as they raised their kids.

“We formed a bond that doesn’t break very easy,” Overby said. “Our kids grew up together.”

Overby, who worked at Younkers for 34 years, has a daughter and a son, Tom, who is married to three-time Grammy Award winning recording artist Lucinda Williams. Her late husband Cal started what is now Austin Youth Basketball when he formed the Austin Travelers in the 1970s.

“(Cal) drove one car full of kids and I drove another car full of kids,” Overby recalled. “After a couple of years the parents started asking ‘what is this, can I be involved?’ We really enjoyed doing that and we had a lot of fun with the kids. One of the boys on the team even had Cal in his wedding.”

Overby worked as the scorekeeper for those early basketball teams that included Bruce Anderson, John Longville and Steve Justice, who now watches his daughter Colie play for the Packers. 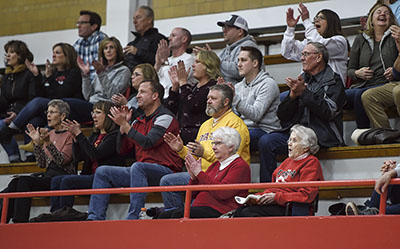 “He would’ve laid his life on the line for anyone of those boys. He loved them and so did I,” Overby said. “It’s very, very cool (to see the different generations). We went to see some of Steve’s college games and we went to some of Bruce Anderson’s and Joe Longville’s college games. We followed them for along time and now we’re following their kids.”

Ostergaard is a mother of four girls and two boys and she was a long-time physical education teacher. Her family was always involved in sports as her husband bowled a pair of 300 games in his life and her son Dave used to wait on Cal’s steps to play basketball with him.

Sports have always been important to Ostergaard and she enjoys watching how the game of basketball has changed over the years.

“Our kids grew up each doing their own type of sports and we supported them,” Ostergaard said. “I enjoy watching how they improve and how they play the game. They’re learning. They play to win, yet they’re still having a good time.”

Mild mannered and calm, Overby and Ostergaard certainly aren’t the loudest Packer fans, but they are amongst the most consistent and they certainly enjoy themselves.

“We always have fun out here,” Ostergaard said.