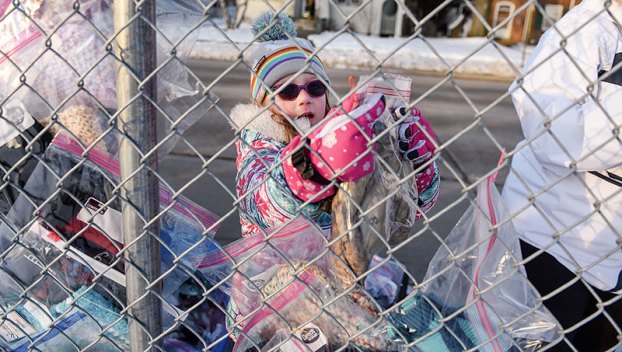 It was early Saturday morning and a group of people were hanging things like stocking hats, gloves and scarves from the fence above Skinners Hill.

The sun was rising and spreading a small amount of warmth over the winter landscape, representative of what those volunteering with Gift of Warmth were trying to do.

Gift of Warmth is a volunteer-based initiative to help make sure people are properly clothed to handle Minnesota winters.

In its third year, Gift of Warmth has taken a steep jump in the amount of clothing items available at the fence for people to simply come and take what they need.

Volunteers hang clothing items on the fence above Skinners Hill early Saturday morning as part of Gift of Warmth.

Two years ago, there were only a couple hundred items available, but the initiative got a bit of a late start because it was an idea born of an observation. The growth has become quite obvious since then.

“Especially after the first year,” said co-organizer Connie Adams in talking about the noticeable jump in donated items. “We we were kind of late that first year.”

Deb Hulet, one of the organizers of Gift of Warmth, spotted a gentleman come into Mayo Clinic Health Systems-Austin, where she works, dressed far too lightly to deal with the Minnesota winters, including shorts and flip flops. It was from this that the idea was born.

“We put something on Facebook to try and get people covered for winter,” Hulet explained. 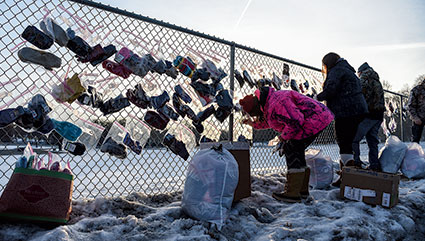 However, that cause to clothe people took a major jump last year when over 1,000 items were made available, filling a large portion of the fence. This year, that number took another leap to between 1,600 and 2,000 items, a number that fluctuated within those parameters some because even after the deadline, people were still donating items.

“So many people were making things and donating them,” Hulet said with a broad smile. “What were we going to say? ‘Sorry, we can’t accept that donation?’”

This was bolstered by the community taking a more active involvement in helping out. One donation consisted of a large number of handmade items, and several businesses throughout Austin became involved.

“So many businesses around town had boxes for drop-offs,” said another organizer, Katie Kuchera. 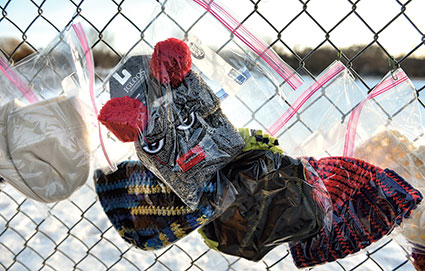 Clothing items of all kinds were available for those who needed them this weekend thanks to Gift of Warmth.

The increase of items the group received this year creates kind of a good problem to have — what to do with all the items.

The expanded inventory stretched the length of the fence, prompting ideas that this event may have to be moved to another spot in the future.

“Gift of Warmth has been so fabulous,” Hulet said. “ Family and friends have really embraced this.”

Any items left over from the weekend will either be saved for next year or possibly donated to other organizations, such as schools, to hand out as necessary. 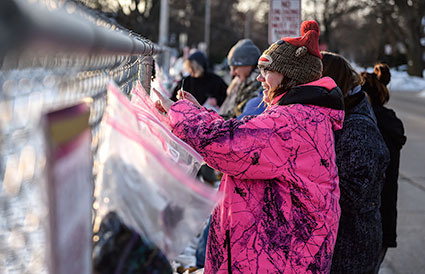 Shawn Julson joins volunteers to hang items of clothing on the fence above Skinners Hill for Gift of Warmth early Saturday morning.

Those businesses that helped contribute to Hand of Warmth: