Bob was born April 14, 1930, on the family farm in Udolpho Township, Mower County, Minnesota, to William and Hattie (Goehtz) Schulz. He graduated from Austin High School in 1948. Following high school, he attended Austin Junior College. In 1950, he enlisted in the U.S. Air Force, where he served until 1954. After his service, he earned a Bachelor of Science degree from Mankato State University. Bob married Jan Schaub on Sept. 6, 1956, in Mankato, Minnesota. They lived in Mankato until 1963, when they moved to Red Wing, Minnesota, for three years before 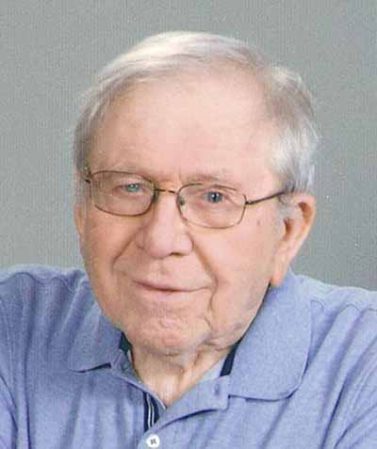 moving to Austin in 1966. Bob worked as a social worker and retired in 1989 as the director of Mower County Human Services. Bob was a dedicated member of St. John’s Lutheran Church in Austin, where he was very involved in many aspects of the church. In retirement, he volunteered at Southgate Elementary School and later worked as a paraprofessional.

He did some cooking and gardening. Bob loved reading the newspaper and at one point in time had subscriptions to the Minneapolis Star Tribune, Rochester Post Bulletin, and Austin Daily Herald. He was a fair-weather sports fan and enjoyed watching the Twins and Vikings.

Funeral services will be held at 11 a.m. on Saturday, Jan. 4, 2020, at St. John’s Lutheran Church with the Rev. James Groleau officiating. Visitation will be from 5-7 p.m. on Friday, Jan. 3, 2020, at Clasen-Jordan Mortuary and will continue for one hour before the service on Saturday at the church. Interment will be in Oakwood Cemetery with Austin American Legion Post 91 and Olaf B. Damm VFW Post 1216 in charge of military rites.

CHICAGO — Retailers legally selling marijuana for the past month in Michigan say they have drawn customers from surrounding Midwestern... read more