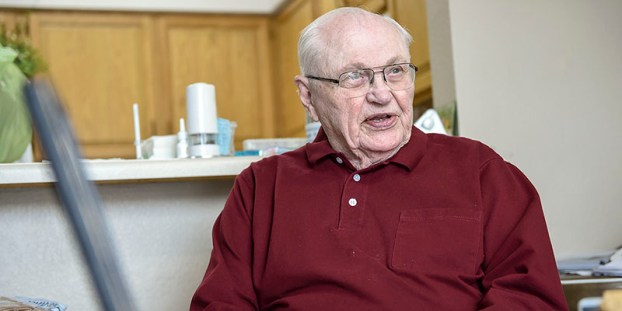 Bob Potach recounts his time in the United States Army and his time of service during the Battle of the Bulge. Eric Johnson/photodesk@austindailyherald.com

For many turning 21, reaching the milestone age is a cause for celebration.

On Dec. 21, 1944, Robert Potach celebrated his 21st birthday in a foxhole outside the Belgian town of Bastogne. It was several days after the beginning of the Battle of the Bulge, the result of a vicious surprise attack launched by German troops on Dec. 16 in the Ardennes Forest, a weak spot in the Allied lines located near the borders of France, Luxembourg and Belgium. Bastogne was completely surrounded by German forces, and the ensuing siege would become legendary in the history of Potach’s unit, the 101st Airborne Division.

Potach celebrated his 96th birthday this past Saturday. 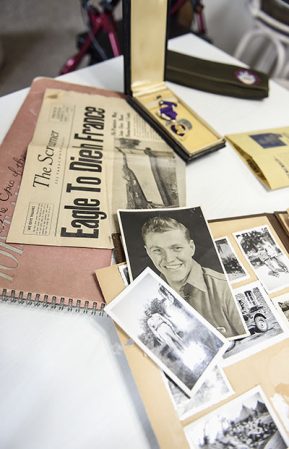 Pictures and mementos from Bob Potach’s time in the U.S. Army are laid about the table in his apartment at Primrose Retirement Community. Eric Johnson/photodesk@austindailyherald.com

Initially trained in 1943 to be part of the Signal Corps, Potach was on a ship heading across the Atlantic Ocean when he and several others made a decision.

“A group of us, about seven, decided we would join the Airborne and become attached to a unit,” he recalled. “When you’re a replacement in the service, you don’t have any rights; you do and go where they tell you. That’s what we wanted to avoid. En route to England on the ship, we let it be known we wanted to join the Airborne.”

Potach then attended jump school in England, receiving his jump “wings” on Oct. 13, 1944.

“We used to run those little roads they had, and I could never understand why physical activities were so important until after the war, when we were sitting around not doing anything,” he said. “They decided we had to make one more jump to get our jump pay; we made the jump and it was uneventful, but the next day I could hardly get out of bed, I was so stiff. That physical activity tones your body so you can take the shock and still operate normally.”

After completing jump school, Potach became a member of Headquarters Company of Second Battalion, 502nd Parachute Infantry Regiment, 101st Airborne Division. Known as the “Screaming Eagles” for their iconic eagle’s head division patch, the 101st first entered combat in the early morning hours of June 6, 1944, jumping behind enemy lines in Normandy during Operation Overlord, what today is frequently called “D-Day.” When Potach joined, the 101st had already distinguished itself in combat in Normandy and as part of the failed invasion of the Netherlands (Operation Market Garden). 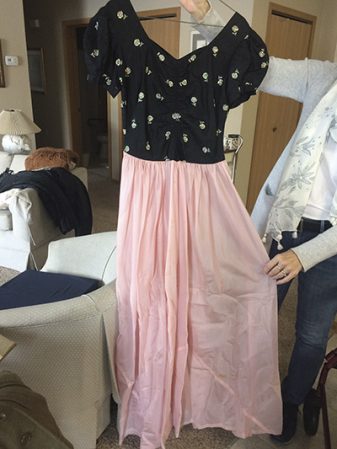 Potach’s  mother-in-law made this dress for his wife out of his reserve parachute. It had to be dyed pink.
Michael Stoll/mike.stoll@austindailyherald.com

“I was a replacement for those who were lost; the rate of losses in the airborne were high,” he said.

At the time Potach was assigned to the 101st, it was believed by Allied commanders that Germany lacked the capability to launch a major offensive. Unbeknownst to the Allies, Adolf Hitler was secretly planning an offensive with the goal of capturing the Belgian port city of Antwerp. Hitler hoped by doing so, he could cut off British forces from the rest of the Allies and force them to negotiate a favorable peace that would allow him to focus his efforts on fighting the Soviets.

On Dec. 16, Hitler’s plan went into effect. German forces in the Ardennes overwhelmed the Allied defenses, causing a panic among the Allies. Potach and his unit were south of Paris when Supreme Allied Commander Dwight Eisenhower called up the 101st. Their destination was Bastogne, a southeast Belgium town with a major road junction.

“My first exposure to combat was at Bastogne, outside in the snow with German troops surrounding us,” Potach said. 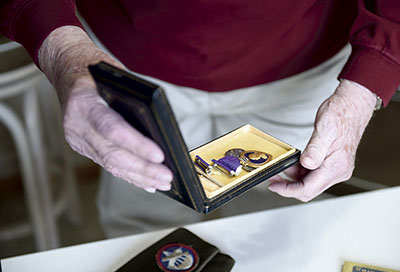 Bob Potach shows off the Purple Heart he was awarded. Eric Johnson/photodesk@austindailyherald.com

When the 101st arrived on Dec. 19, they had little in supplies and no winter gear in the midst of one of the worst snowstorms the area had seen in two decades.

“Our winter gear came the following March, when it’s spring in Belgium,” Potach said. “Our winter gear would have been very welcome, but I don’t know where it was. We didn’t have it.”

“That’s when I decided I was never going to live where it was cold; you can see how well that worked out,” he added with a laugh.

On Dec. 20, the Germans surrounded Bastogne. Over the course of the next two days, they launched several attacks in an attempt to overwhelm the 101st and capture the town.

During the fighting, Potach was part of an 81-millimeter mortar team.

“I’m deaf in this ear,” he said, pointing to his right ear. “That was before they had ear protection. I’d drop (the mortar) with my right hand because I’m right-handed, so my ear was right next to the firing tube.”

On Dec. 22, Gen. Heinrich Freiherr von Lüttwitz, commander of the XLVII Panzer Corps, sent a message to Brig. Gen. Anthony McAuliffe, acting commander of the 101st, demanding the surrender of the town and threatening to annihilate the Americans if they failed to comply. Potach remembered McAuliffe’s defiant, one-word answer: “NUTS!” 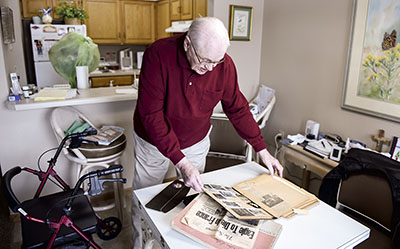 Bob Potach looks through memorabilia from his time serving in the United States Army during World War II. Potach served during the Battle of the Bulge. Eric Johnson/photodesk@austindailyherald.com

“You respected (McAuliffe) more; he gave the answer that I think 90 percent of us would have given,” Potach recalled. “We weren’t about to surrender. Our training didn’t include any prep for that. The spirit of the Airborne was different than a lot of the rest of (the Army). When you jumped out of the airplane, you did something that most people wouldn’t want to do, especially when you have enemy opposition on the ground.”

McAuliffe’s response boosted morale among the 101st and the rest of the Allies. Gen. George Patton, commander of the U.S. Third Army, sent a message to the defenders of Bastogne that his forces were on their way. In turn, Hitler ordered Bastogne destroyed.

More attempts were made by the Germans to capture the town, including a major attack on Christmas Day. But despite being short supplied and outnumbered, the 101st held out. On Dec. 26, Patton’s Army, led by elements of the Fourth Armored Division, broke through the German lines and reached Bastogne.

While claims have been made that veterans of the 101st said they were in no need of rescue, this was not the case with Potach.

“We were willing for anyone we could welcome,” he said. “That was my personal attitude; we were never overconfident. We were good people when it came to looking out for one another, but I wasn’t looking for that battle.”

But while Bastogne remained in the hands of the Allies, the Battle of the Bulge was far from over. The German offensive stalled on Dec. 31; the Allies then had to fight to gain back the lost territory. The 101st soon found itself a part of the slow battle fought during heavy winter conditions.

“I don’t know how many weeks it was until we saw the interior of a structure; we were out in the open all of the time,” Potach said. “We weren’t dressed for it; we had regular gloves and regular shoes, which were jump boots. They made you a little taller, but not warmer. It was months before I had a change of underwear or socks.”

It was in these cold conditions that Potach picked up a vice that many soldiers overseas took up: smoking.

“We had K-rations so often because we were out and didn’t have a full kitchen,” he said. “Every single one of them had cigarettes in them, so if you were sitting out in the middle of nowhere and you were cold and there was nothing going on, if you had cigarettes, you used them.”

Potach also learned the most important lesson of combat.

“The important thing was to stay together, do the right thing and stay alive,” he said.

By the war’s end, Potach was a staff sergeant serving as his battalion’s supply sergeant. He returned to his hometown of Fremont, Nebraska, in January 1946, bringing with him a Purple Heart, Good Conduct Medal, Presidential Unit Citation Ribbon and a European-African-Middle Eastern Campaign Medal adorned with several campaign stars. The Army had tried to get him to stay in longer, going so far as to offer to send him to Officer Candidate School. Potach declined; he had seen enough.

After finishing college in Fremont, Potach took a job with Hormel Foods, working in Fremont for 14 years before coming to Austin, where he eventually retired.

While the past 75 years have faded some memories of his time in World War II, some of them still remain.

“I lost a lot of friends there,” Potach said. “We were all there for one purpose, and that was to stay alive and kill the enemy.”

As part of its efforts to have its community spend time with the wider Austin community, Primrose Retirement Community will... read more