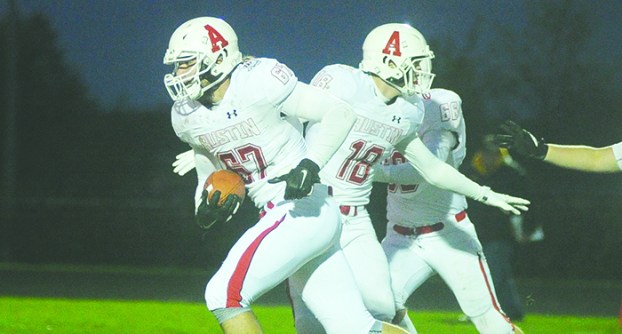 Austin's Oliver Andersen runs an interception back for a score in the first quarter in Byron Friday night. Rocky Hulne/sports@austindailyherald.com

Austin senior Oliver Andersen wasn’t born on a football field, but it didn’t take him long to find one.

Now the former Austin water boy turned lineman knows he is not done yet playing football yet as he has committed to play at Division II Minnesota State University in Mankato with a partial athletic scholarship.

Andersen, who took sixth in discus at the Minnesota Class AA State Track and Field Meet last spring, is also very likely to compete on the MSU track and field team as well. MSU holds a very special place in Andersen’s heart as his parent’s met there while his mom was playing volleyball for the Mavericks and his grandpa and great grandma also attended school at MSU.

“It’s close to home. I will have a really good support network there,” said Andersen, who lived in Mankato as a child before moving to Austin at the age of six. “We have family and friends in Mankato and the church we used to go is still there.”

Andersen rarely left the field for the Packers this past season as he played on the offensive and defensive line, where he had 43 tackles, eight sacks and an interception for a touchdown. Andersen, who was home schooled until his freshman year, tried out flag football as a third grader, but he didn’t get serious about football until he put on the pads as a fifth grader.

“I didn’t like flag football because we weren’t allowed to tackle people,” Andersen said.

Andersen is looking to gain weight and get stronger to prepare for the next level of football and he’s ready to get to work.

“I’m really excited to focus on playing defense and to get better at it, but I’m definitely going to miss being on the field the whole game. As hard as it was, it was nice to affect the game on every snap,” Andersen said.

The Mavericks are 13-0 overall and they will take on No. 8 ranked Slippery Rock in the NCAA Division II semifinals at 11:30 a.m. Saturday.

Andersen has enjoyed the ride football has taken him on so far and he’s hoping it gets even better in Mankato.

“It’s an amazing experience. I’ve had an absolute blast having coaches try to get to try to come to their school,” Andersen said. “I’ve had an amazing time playing high football and I’ve heard that playing college football is a step above that.”

Blooming Prairie senior Gabe Hagen, a standout on the Awesome Blossoms state title team, has also committed to play for the Mavericks.