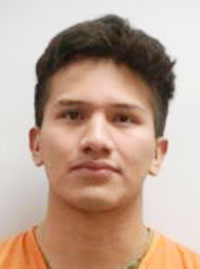 According to the court complaint, police responded to a domestic disturbance call at about 1:10 a.m. on Sunday in the 200 block of Fourth Avenue Southeast. They made contact with an adult female who had injuries on her neck, head, ears and hands. She reported Maldonado had strangled her.

The victim told police that earlier that evening, she and Maldonado went to a party, where Maldonado got drunk. On the drive back, she said Maldonado became verbally abusive, so she dropped him off at the home of one of his relatives. He later got a ride to her residence and was again verbally abusive, telling her he wanted to kill her.

The victim alleged Maldonado then pushed her against the wall and strangled her for about 15 seconds. She said she could barely breathe and was unable to speak while he did it. He then hid her phone so she could not call anybody. When she found her phone, she went outside to text a friend for help. She said Maldonado followed her, threw her on the ground, and began strangling her again for about 30 seconds, hitting her head on the ice as he did.

The victim complained of pain to her throat and said it was difficult to swallow. She also said she had a headache and felt “dizzy.” She went to Mayo Clinic Health System-Austin, where a doctor classified her injuries (bruising around the neck, abrasions, hematoma from head trauma, and bleeding on her ear) as “substantial bodily harm.”

Police arrested Maldonado, who was intoxicated. He was uncooperative, but did admit he and the victim had been arguing.

Maldonado will appear in court again on Dec. 23.

Lyle to host pancake breakfast with Santa to prepare for 150th

To get ready for its 150th anniversary celebration in June, Lyle is hosting a pancake breakfast and bake sale Saturday,... read more