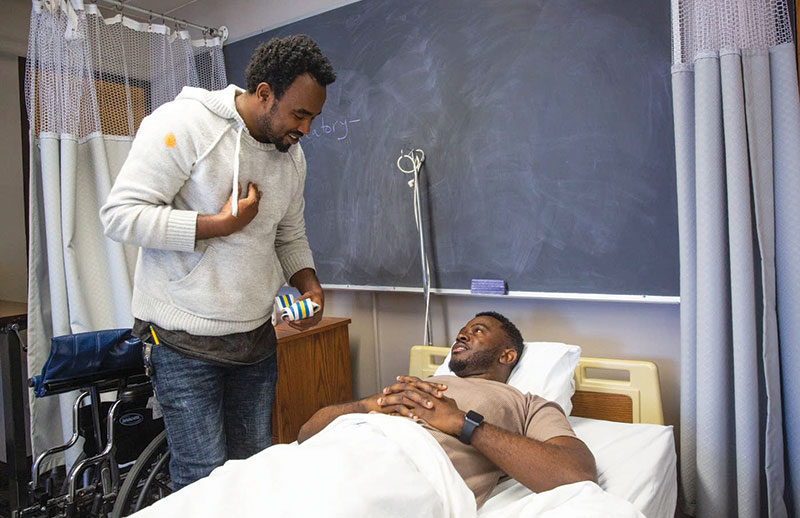 Dagmawi Lechebo of Ethiopia, left, practices greeting a patient and moving them into a wheelchair with Aaron Allison of Liberia during their certified nursing assistant class at the International Institute of Minnesota in St. Paul on Friday. The institute has helped new immigrants resettle, learn English and train for jobs for a century. Evan Frost/MPR News

Famata King leads a daily skills class for new immigrants in the nursing assistant program at the International Institute of Minnesota. On a recent day, she guided the students on getting the water temperature just right as they practiced foot care.

It was symbolic of the kind of small but important lesson of settling into the new world that the agency has been teaching for a century as it’s helped generations of new Minnesotans get a footing here resettling, learning English and training for jobs.

As it celebrates that century this week, however, its leaders are trying to navigate the agency through unprecedented changes in federal immigration policy that are slashing the number of new immigrants.

The institute resettled 578 refugees in fiscal year 2016 but expects it will serve only 100 through next September as the Trump administration cuts the number of refugees allowed into the country.

“The unpredictability of the last three years has been really hard,” said Jane Graupman, the group’s executive director. “It’s hard to run a program when you have no idea what’s going to happen from year to year and that’s very different than how it’s been in the past.”

Minnesota’s foreign-born population is about 8 percent now compared to 20 percent a century ago. In the 1980s, refugees came to Minnesota after spending two years in a refugee camp. Now they spend 18 years on average before arriving, she said.

The agency has adapted in response to the changes, now offering employment support, health care screenings, mental health and housing services, as well as immigration visa support and English classes.

Nursing assistant training is one of the institute’s touchstone programs, and it offers immigrants a chance to get into the health care field.

The agency trains about 145 people in this program each year — many for whom English is a second, third or fourth language. They work in hospitals, nursing homes and other health care facilities. Hundreds have become nurses over the years.

“The learning process here is easier,” said Pabitra Gautam, a 20-year-old nursing student from Nepal who moved here when she was 10 and hopes to become a licensed practical nurse.

“It’s easier to understand, especially people from all around the world,” she said. “There are very diverse people here from everywhere. So, yeah, we get to meet new faces, new people, learn more in simple, easy ways.”

King said at the end of this 11-week course, her students will be ready to launch into a new career.

“They go to the nursing home and they give quality care to the residents and they move on to be nurses and instructors, like me.”