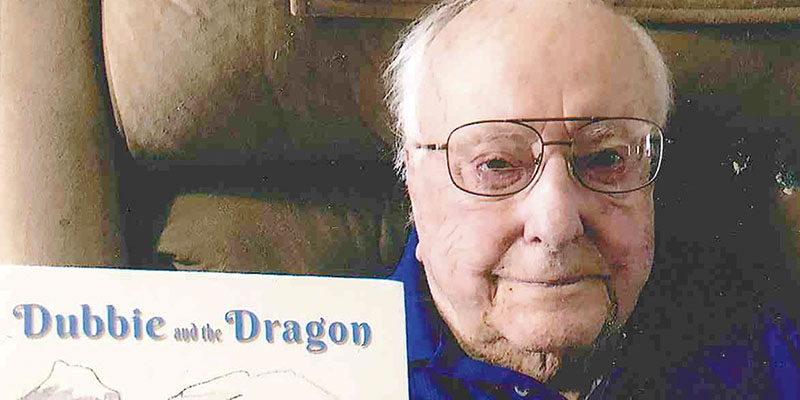 Kenneth Kelly, 100, of Austin recently had his children’s book, “Dubbie and the Dragon,” published.

The story, featuring a young boy saving his town from a dragon, had been in the author’s pile of writings for years before a grandchild found it and said he should have it published.

This was not the only way Kelly’s family impacted the story of “Dubbie and the Dragon.”

Kelly was the second oldest of seven children. Part of his growing up was spent taking care of them, including telling them stories to keep them entertained.

“I made up stories about frogs or whatever else came into my mind,” he said.

Part of the name for “Dubbie and the Dragon” also came from Kelly’s siblings.

“Dubbie was stuck in my mind. I used to call my little sister Dubbie all the time when she was little,” he  said.

Still, there was also the matter of finding an animal for the story.

“I love the elephant and the buffalo, but they were too big to be put in this story,” Kelly said. “And all of a sudden, ‘Draggie’ came into my head. The Lord put it there.”

And so, Dubbie and Draggie the dragon became the main characters for Kelly’s book.

“And then I took off writing the story,” he said. 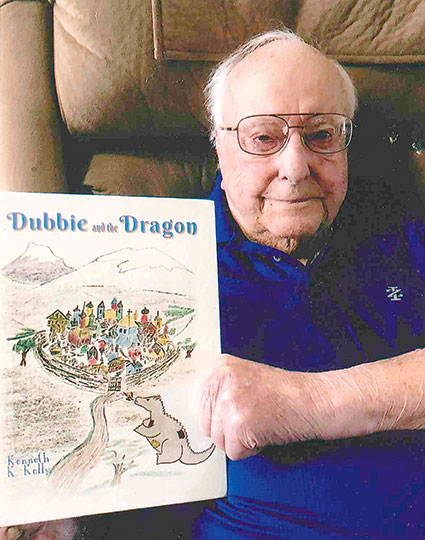 Kelly said he has written three stories featuring the two, although he and his family plan to wait to see how the first one sells before publishing the other two.

Another family member that had an impact on ‘Dubbie and the Dragon’ was Kelly’s sister, Mary Kelly Nepp, who provided the illustrations for the book.

While the two talked about what the illustrations should look like, for the most part the story set what had to be drawn, he said.

Kelly credits God for him being a writer. In the 67 years he has been writing, he has written love stories, documented stories his father told him about his time on the railroad and poetry.

Kelly gives much of his poetry away as gifts to friends and family. For him, family is one of the two most important things in life.

“They’re everything. If it wasn’t for them and the Lord, I would never be here,” Kelly said.

It was when he was sick and off of work for a time that Kelly said he was inspired to become a writer.

“All of a sudden I got a message from the Lord and he inspired me to be a writer,” Kelly said. “I jumped at the chance.”

As someone who enjoyed watching programs about writers, Kelly said he was excited to become one himself.

One thing Kelly knew he wanted to do was write a story and while he isn’t sure what exactly inspired that, part of it is his love for children.

As long as he is able to, Kelly said he plans to continue writing. For much of his work now, he tells family members what he is writing and they transcribe it for him.

“Dubbie and the Dragon” is Kelly’s first story to be published on its own. It is available on Amazon and through Dorrance Publishing at its website, www.dorrancepublishing.com. The book is also available in some bookstores, including Austin’s own Sweet Reads.