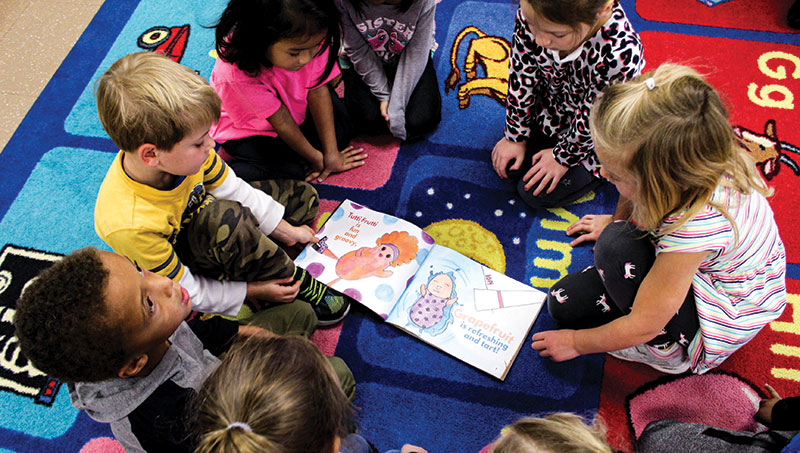 A group of Woodson kindergarteners in Sean Daugherty’s class gathers around a copy of “Jellybeans,” a children’s book written by Austin’s Kiersten Hall and illustrated by Shaina Ryther, also of Austin. Hall’s daughter Chelsea Farr, also served as the graphic designer. Photos by Hannah Yang/hannah.yang@austindailyherald.com

Tackling the topic of being kind and inclusive, a lesson is being taught to children at Woodson Kindergarten Center about embracing the diversity that makes up their community with an unlikely teaching tool—jelly beans.

Sitting inside Sean Daugherty’s Red Bear kindergarten class on Tuesday morning, Kiersten Hall, author of “Jellybeans” and Shaina Ryther, illustrator, visited with students. Flipping through colorfully illustrated pictures inside the book, Hall shared a poem about the importance of embracing differences, while realizing that everyone is “the same.”

The synopsis of the book describes 35 jellybeans coming together to share a meaningful poem promoting kindness and inclusivity with children while joining them on an adventure that helps them discover their unique characteristics, and realizing that they all are fundamentally the same.

Students spent their class time talking to Hall about her book and discussing what it meant to be a good person. Each jelly bean character had their own personalities and physical traits that make them endearing to anyone who could see themselves being represented in the book. 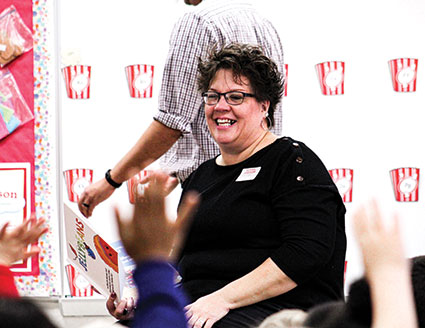 Kiersten Hall of Austin, and author of the children’s book “Jellybeans,” visits Woodson Kindergarten Center on Tuesday to read her book about inclusion and diversity to the students.

This entire week, Hall and Ryther will be visiting classrooms at Woodson Kindergarten Center and interacting with students to learn more about the lessons behind “Jellybeans.”

“Cinnamon is sassy,” Hall told the students, “ and Sour Cherry is grumpy. Toasted Marshmallow is sweet, lemon lime has a great time…be your own jellybean and accept one another. Being a jelly bean of different colors and shapes while accepting those differences makes for a much easier life.”

Building kindness one jelly bean at a time

Creating “Jellybeans” didn’t take Hall long to complete. She recalled sitting down and watching Netflix for a little while before she was inspired to write a sentence for a poem. Eventually, a couple more sentences were created and she ended up with a whole poem about accepting differences.

“Truthfully, I wasn’t thinking about jelly beans,” Hall said. “I just thought it was cute, and then a poem came together that was similar to Dr. Seuss. I eventually came up with an 18 stanza poem in 45 minutes.”

Her daughter, Farr, and (adopted daughter as Hall likes to call her) Ryther eventually got involved with creating pictures and designs to go along with the poem. A special aspect of this project was the fact that the author, illustrator and graphic designer are all residents in Austin. 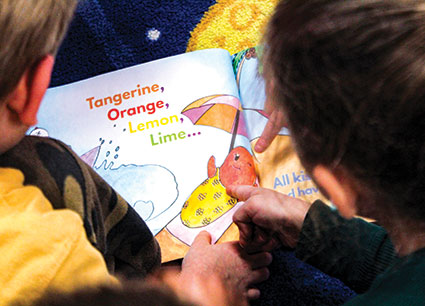 A group of Woodson kindergarteners in Sean Daugherty’s class gathers around a copy of “Jellybeans,” a children’s book written by Austin’s Kiersten Hall and illustrated by Shaina Ryther, also of Austin. Hall’s daughter Chelsea Farr, also served as the graphic designer.

Within the pages, little jelly bean characters associate color with different personalities and the simplistic nature of these illustrations gravitate toward children ages 0 to 7. Initially, Ryther conceptualized her illustrations to be more detailed. However, she then realized that simplifying her drawings would help engage the younger audience much more effectively. She thought about all of the people who originally held little faith that she would be capable of creating something that would become a huge success in the commercial aspect of art.

“Originally, these jelly beans had legs and looking back on it, I thought they looked creepy,” Ryther said. “Each of the jelly bean characters were too detailed and each had their own backstory. There were a lot of people who doubted me and thought my art was not good enough. It’s kind of nice to be able to tell them ‘I told you so’ and I’m really proud of (this project). This book was made by families for families. This book is all about being inclusive. We don’t want anyone to be left out.”

The children’s book was published on June 5, 2019, and has since become a staple in bookstores, online sellers, and even in person. Major retailers like Barnes and Noble and Walmart have picked up “Jellybeans” and now customers can purchase a copy of the book for their loved ones this holiday season. Soon, the book will be available for purchase at Target stores.

However, a special acknowledgement was given to Sweet Reads, owned by Southgate teacher Lisa Deyo, who was the first bookstore owner to stock “Jellybeans” inside the shop. Now there are gift stores and toy shops around the country that sell “Jellybeans” as a special gift with a special message.

“I feel that the children are a lot more receptive to the message than adults,” Hall said. “Parents and grandparents end up loving the lesson, and buy the books for themselves. You don’t have to have kids to buy the book. This story is really for everyone. Kids already have this lesson in their brains about being nice to each other, and now they got books that reinforce that message.” 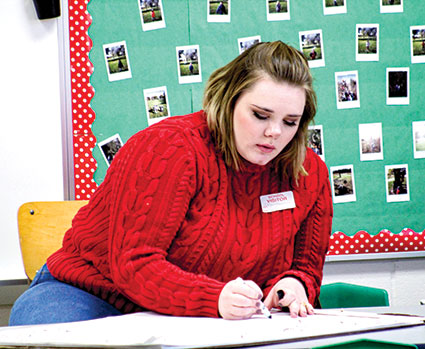 Shaina Ryther, illustrator for the children’s book “Jellybeans,” draws a “self-portrait” where each student that is a part of the class can see themselves as a jellybean.

Encompassing important aspects to social and emotional learning, Daugherty mentioned that Austin Public Schools has been forthcoming and one-step ahead in incorporating those types of lessons into their curriculum at Woodson Kindergarten Center. Having Hall and Ryther visit his classroom was an experience that helped bring to life the importance of social and emotional development in children, he said.

Aside from “Jellybeans,” each month Woodson staff incorporates different literature digitally into their curriculum that teaches children about empathy, gratitude and other important facets of what it means to be a good person. Whether it meant using worksheets or having the students write letters to fictional characters from their lessons, they’re also getting a healthy dosage of what it means to be kind.

“I feel that technology has taken a lot of the part of social and emotional development away from the classrooms and at home,” Daugherty said. “I’m glad that school districts can pick up a “Jellybeans” book and and use them to teach students how to be a good person before teaching them about anything else. This school district does an awesome job with that.”

Those interested in purchasing a copy of “Jellybeans” or learning more about the story can visit www.thejellybeanbook.com/jellybeans