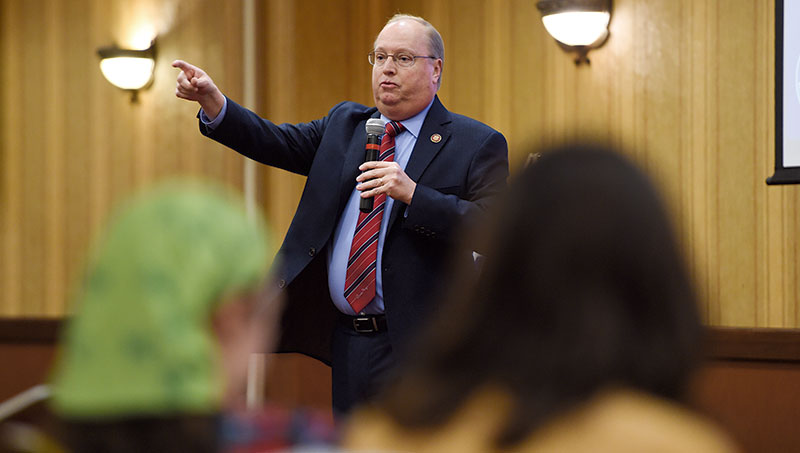 It was clear early on that Wednesday night’s town hall meeting, hosted by Minnesota 1st District Rep. Jim Hagedorn at the Hormel Historic Home, was going to be lively.

The meeting, which ran a little over an hour, covered a number of different subjects ranging from health care to climate change, was often times rife with contention from an evenly split room.

During one moment of particularly emotional back and forth on whether or not President Donald Trump’s administration is allowing increased Russian influence in the Middle East by pulling troops out of Syria, a member of the audience shouted, “We’re talking about Trump!” when it seemed Hagedorn was avoiding the issue.

Before that Hagedorn attempted to defend the administration.

This drew a heated response from the crowd, made even more contentious when Hagedorn faced the question full steam ahead.

“You’re not going to like it, but nobody has been tougher on Russia than Trump,” Hagedorn said.

The response drew a mocking laugh from many in the crowd.

For most of the night, things went back and forth drawing both applause and condemnation throughout.

Towards the end, talk moved to the subject of climate change, which again became decisive between those supporting the idea of man-made climate change and Hagedorn.

When touching on trade, Hagedorn suggested that very little will be fixed until both sides of Congress sat down together.

“We should,” he said. “We should be passing the Canada-United States-Mexico Agreeement trade agreement. It’s an improvement over NAFTA.”

One of the calmer moments included discussion on the improvement of health care for veterans.

Hagedorn spoke strongly on the idea of making sure veterans get the best treatment possible.

“It’s a total injustice,” he said. “You should get both your disability and you should get your pension. Veterans should be able to choose doctors and hospitals.”