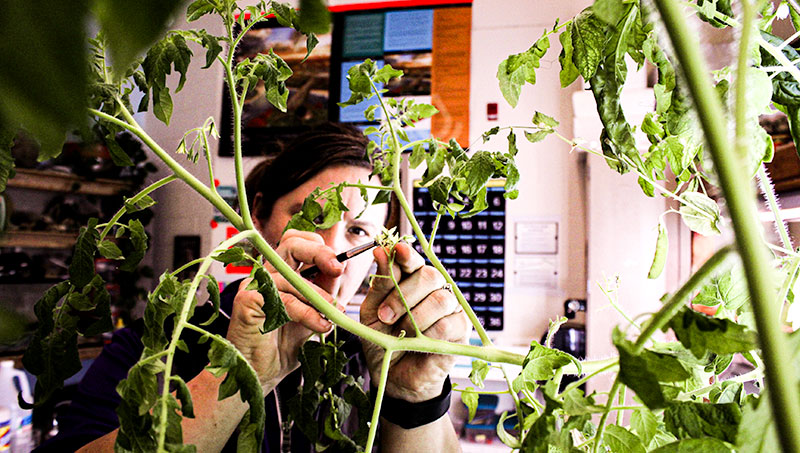 Christina Swanek, Grand Meadow Agricultural Sciences teacher, carefully pollinates tomato plants that are growing on one of the three hydroponic towers she recently obtained through a grant. Her students will be able to see agriculture in action through the school year instead of by season. Hannah Yang/hannah.yang@austindailyherald.com

GRAND MEADOW—Delicately swabbing the inside of a tomato flower, Christina Swanek carefully took a small paintbrush and attempted to gather pollen within the bristles.

Slowly, the Grand Meadow agricultural science teacher transferred the pollen into another flower and started pollinating by hand.

It was like watching an artist painstakingly paint in intricate detail, however; she wasn’t using an outdoor garden as her landscape, rather the inside of her classroom.

Three six-foot-tall towers with various plants growing from the structures have taken root inside of Swanek’s classroom at Grand Meadow High School. From a special $3,000 grant from Compeer Financials as well as Grand Meadow Educational Foundation providing an additional $500, Swanek was able to install the three-tower hydroponic system, creating an opportunity for her to teach her ag science students about food production throughout the year. 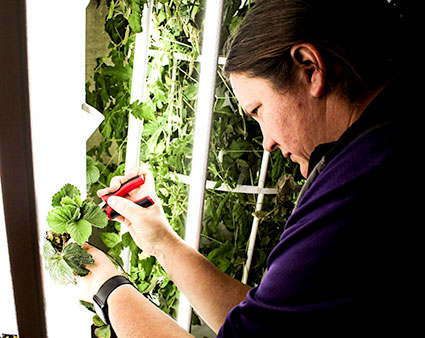 Christina Swanek, Grand Meadow agricultural sciences teacher, carefully pulls out a strawberry plant that was growing on one of the three hydroponic towers inside of her classroom. Swanek recently obtained the three towers because of a grant that allows her students to see produce grow all year-round as opposed to one season. Photos by Hannah Yang/hannah.yang@austindailyherald.com

The grant application was written in April 2019, and Swanek received the green light last June to go ahead with the project.

“I saw these towers at the Minnesota State Fair a couple times,” Swanek said. “I thought it would be a good way for students to see something growing while they’re with me in the classroom for a year, as opposed to planting something in the fall and not getting to see what came from their work.”

Hydroponics is a subset of hydroculture, and is a growing method that involves mineral nutrient solutions in a water solvent, without needing soil. This way, produce can be grown all year-round. Since the roots have easier access to the nutrient-rich water solvent, the plants can grow quickly and bigger.

Plants also won’t encounter as many pests or diseases that thrive in soil, reducing the risks of becoming infected. The vertical design allows for growing space efficiency and uses less water than the traditional garden.

For agricultural scientists, finding new ways of food production have been explored, with hydroponics growing as a trend for urban farming as well as for individual homeowners who want the ability to produce their own vegetables. 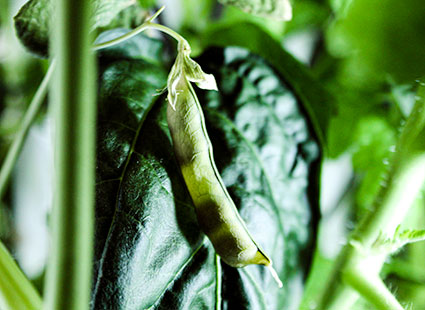 A sugar snap pea pod grows in one of the hydroponic towers.

With a lack of fertile land availability required to meet the demand of crop cultivation, as well as having to feed a human population that will reach the 9 billion mark by 2050, the value of hydroponics will be rising in the next few years.

Market Research Future, a firm specializing in market reports related to the agriculture sector, forecasted in its reports on hydroponics that by 2022, the global hydroponics crop value is expected to earn revenue worth $27.29 billion.

There’s some attractiveness with this method of growing since there are signs of improved yields and higher returns on investment, as well as being more environmentally friendly.

The average acre of hydroponically-grown crops can earn between $200,000 and $250,000 annually, according to research studies conducted by the University of Florida.

However, start-up expenses are generally high for hydroponics, especially if using it to replace the conventional methods of agriculture. Swanek said that the towers cost about $1,100 a piece, and to produce something substantial to feed numerous students and staff would require more towers. It would be hard to determine if that would be cost-effective or more cost-consuming, as well as energy efficient. 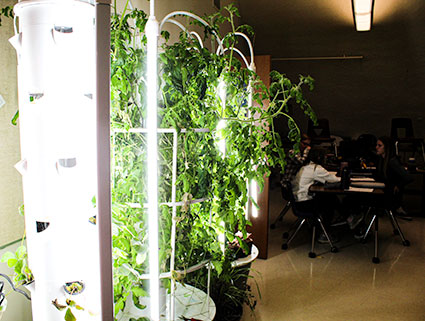 Three hydroponic towers stand off to the side in Christina Swanek’s classroom at Grand Meadow High School. Agricultural science students can see plants grow throughout the school year instead of one season.

In order to continuously grow her plants, the towers would need to keep running and will not be able to shut down for more than four hours at most. Water also needs to be filled. Swanek uses about 12 gallons of water per week in order to run the towers, which can be filled up to 20 gallons each.

When Swanek graduated from school 25 years ago, she said this type of innovation was never even discussed in her classes. She is entering a new frontier with agricultural education.

“This wasn’t even remotely on our radar,” she said. “We as farmers have got to find ways to adapt and to evolve, and that goes for growing our food.”

There have been mishaps, however. Swanek noticed that some of the cucumber plants had died off, and seeds for squash didn’t take root at all.

Tomato plants are hearty, but there have been no signs of flowering or budding fruit yet.

“I’m really hoping that there’d be some budding or more blossoms soon,” she said with a twinge of hope. “In agriculture, you have to produce something.”

It has been a process, but it is something that she and her students are learning. They have learned about changing one variable or factor and possibly coming up with the best combination to create the most amount of quality produce.

By having these hydroponic towers, they will be able to see the value of how much goes into creating something for consumption and how much they would be sold for at local grocery stores. 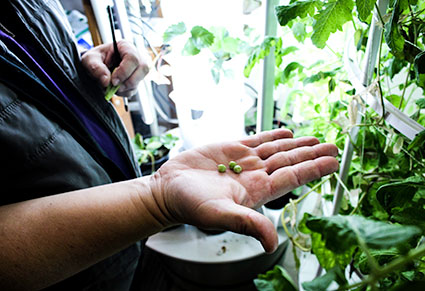 Christina Swanek, Grand Meadow Agricultural Sciences teacher, opens a pea pod that was growing on one of three hydroponic towers inside of her classroom.

“It would be pretty easy to dry some of the herbs and be able to prepare them for sale,” Swanek said. “That would be something that shows value in having these towers for students. They would learn about the process of growing their food, but also how much profit they could earn depending on how much they’ve grown.”

It’s unknown to Swanek how much energy the towers use in order to operate and grow the vegetables. There were some monitors purchased to detect how much energy was consumed by the towers, and Swanek eventually hopes to gather enough data and calculate exactly how much water is being used to sustain the towers.

Since this was the first time that Grand Meadow obtained hydroponic towers for their agricultural sciences curriculum, Swanek is also learning alongside her students. Through trial and error, she found that herbs grow very well in the tower system, having produced ample amounts of basil, parsley and sage. Lettuce heads were sprouting abundantly in one of the towers, and some of the strawberry plants were growing well nicely.

The possibilities growing from the hydroponic towers could be endless, the value of which needs to be studied further.