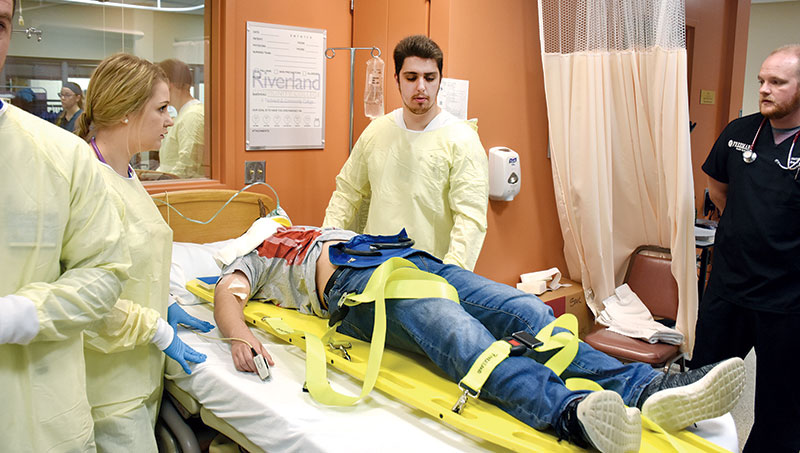 Those walking into the Health Science Simulation Lab on Monday at Riverland Community College were treated to a chaotic scene.

Severely injured patients laid on hospital gurneys strewn about the room as nursing, radiography, medical assistant and law enforcement students worked frantically to figure out what to do next. In one section, a man clung to life as he was treated for a pneumothorax, a collapsed lung caused, in this case, by a stick puncture in the right upper lobe of his lung; another featured nurses trying to treat a man who suffered a blow to his head after falling.

Then the words that brought order to the chaos sounded throughout the room: “The simulation is over.”

At that the “patients,” actually actors made-up to look as if they had suffered gruesome injuries, got up from their gurneys, in good health and completely unharmed. The students then went to another room to debrief and figure out what, if anything, they could have done differently before running the simulation again.

This is the first simulation of its kind involving so many different departments done at RCC. 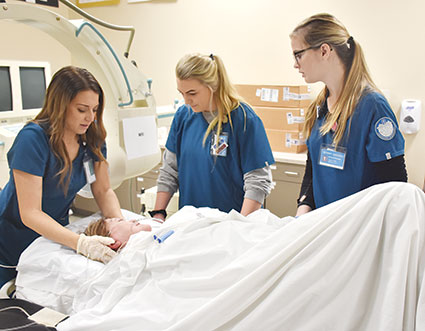 “The overarching objective of this simulation is while each department has their own thing they need to do, it’s also to make the realization that when someone gets hurt, and everybody thinks their job is important, which they are, but how do you work together? How do you get everything that you need to get done? What are the priorities? That’s what has to be figured out,” said RCC Simulation Lab Coordinator Jane McKinley.

The simulation was planned months in advance and featured students who are close to graduating. Scenarios simulated on Monday all represent situations that could take place in a hospital.

“The students that are involved in this simulation do not know what’s coming; they don’t know what kind of patient they’re getting, so it’s a surprise to them and it’s a way for us to gauge how prepared they are for the real world,” said Laura Beasley, RCC Dean of Nursing. “The patient comes from EMS like they would in an ambulance and they get sent down the hall into our nursing program lab, which is set up kind of like a hospital. In that mix, we have criminal justice students practicing what they may encounter in a hospital setting when an emergency arises. It’s a big deal.”

“It was pretty realistic,” said Misty Dugstad, a nursing student who participated in the head injury scenario. “The actors were really great; when they were starting to lose consciousness, they wouldn’t respond to us, the way it would happen if it were an actual situation. It felt extremely real.” 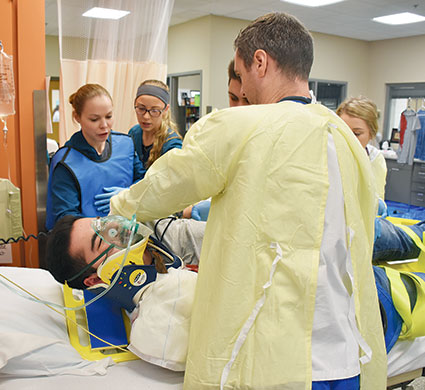 “It gives students experience in a real-life setting. In that setting they may make mistakes they can learn from, so when they do encounter it again, they can practice what they learned to do it differently. ”
– Laura Beasley, RCC Dean of Nursing

“We were definitely surprised by what we had,” said Bailey Schwarz, a nursing student who participated in the pneumothorax simulation. “For us, we knew how to figure it out right away because we could see the stick penetrating into his lung. If we didn’t have that, it would have been harder to figure out. It was very real-life. When he started to seize, we had to figure out how to react to that situation.”

“I think it went good,” she added. “We worked as a team; we followed all of the steps and protocol we needed to.”

While some mistakes may have been made, the simulation allowed students to learn from them.

“It gives students experience in a real-life setting,” Beasley said. “In that setting, they may make mistakes they can learn from, so when they do encounter it again, they can practice what they learned to do it differently.”

“I learned that it’s really important to be on our toes, especially in an emergency situation; there could be multiple different traumas,” Dugstad said.

McKinley praised the students for how they handled the simulation.

“Things are always a little bit rough the first time around,” she said. “As far as the students, they did fantastic, especially coming into this so cold and knowing nothing about what to expect and how chaotic it is.”