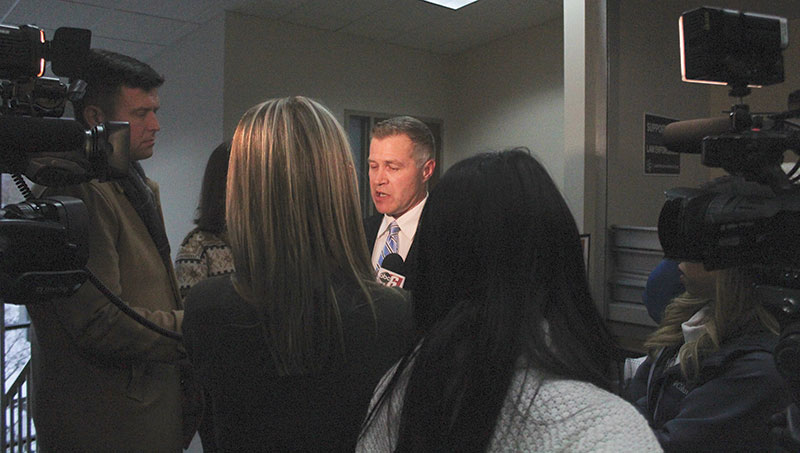 MANTORVILLE—Sept. 7, 2018, will forever be a tragedy to two families as a result of a single choice.

Dozens of people came out to the Dodge County Courthouse for the sentencing of Tanner Kruckeberg, 25, of Dodge Center on Wednesday afternoon.

Kruckeberg had pleaded guilty two days before the one-year anniversary of the crash to a single count of criminal vehicular homicide-operate a motor vehicle in a grossly negligent manner, according to a previous story. The two-car crash killed Blooming Prairie first grade teacher Rachel Harberts, 43, and 8-year-old Emerson Harberts. Jaxon Harberts, now 13, was seriously injured but survived. 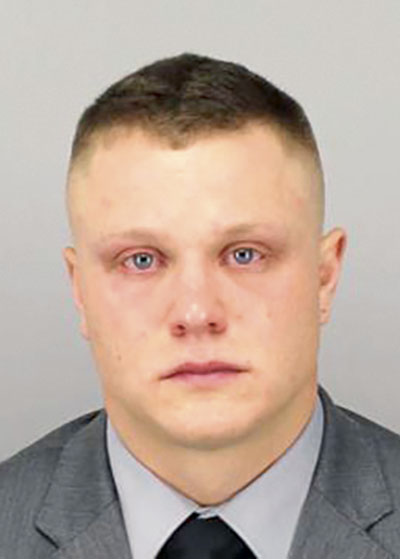 During the investigations that took place, Kruckeberg admitted to law enforcement that, while he was driving his family’s Hummer H3 on Sept. 7, “he was looking down at his center console area to put away his cellular phone, when he looked up (and) rear-ended the (Harberts’) Mercury,” according to a search warrant affidavit filed by the Minnesota State Patrol.

Upon further insight, Kruckeberg’s driving record showed he had been garnering infractions in southern Minnesota from the time he was 16, even after the crash that killed Rachel and Emerson. On July 11, 2019, he was cited for a speeding ticket.

Judge Jodi Williamson sentenced Kruckeberg to serve 30 days in jail for a staggered period of five years, with the last remaining five years of 30-day jail time waived if he abides by the terms of his probation. That meant no alcohol or illicit drug use, submitting to random chemical testing and undergoing mental health evaluations.

The other 30-day stays in the jail are to be spent every year on Sept. 7, which is the anniversary of the crash that claimed Rachel and Emerson’s lives. Kruckeberg must also complete 100 hours of community service, during which he will educate the public about the effects of distracted driving.

He was also handed a 57-month stayed prison sentence, and his driver’s license will most likely be suspended as a result of the conviction. The  Minnesota Division of Vehicle Service will make that decision once it receives notice of the conviction.

After the sentencing, Kruckeberg was immediately taken into custody by the Dodge County Sheriff’s Office before being transported to the Steele County Jail to carry out the first 30-day stint of his sentence.

Williamson shared her perspective of what she thought was an “epidemic of distracted driving” in the country and her hopes that awareness and handling of this problem would rise to the same level of driving under the influence before delivering the sentence.

“It was his choice to drive recklessly and unintentionally caused two lives to be lost,” she said. “He did not intend that, but he made a choice.”

Williamson noted that in this type of case, that there were no “winners” and that everyone was touched by the tragedy in some form: The Harberts for losing a mother, daughter, friend and teacher, and a little girl who, having her whole life ahead of her, instead had it cut short. For Kruckeberg, it meant living with the guilt every day of knowing that his choice to look at his cellphone resulted in him killing two people and seriously injuring another.

“This is a difficult, horrible tragedy,” Williamson said. “There’s no winning on these types of cases. I can only hope that this will open the door to healing for the family and this community. Dodge County is a small county, and it has affected not only the people involved, but law enforcement and first responders who had to respond to this horrific event.”

For family members, losing Rachel and Emerson in a senseless crash was something they all struggled to understand. Spilling down to an overflow room in the courthouse, the families of both the victims and the defendant were present to hear what the effects of the crash did to the ones they loved.

Some shared testimonies related to how loved Rachel and Emerson were, and how now they will no longer be able to create any new memories with them. Or how remembering the good times became harder by the day. Jeremy Post, Rachel’s brother and Emerson’s uncle, said he could no longer feel joy from remembering memories about them. 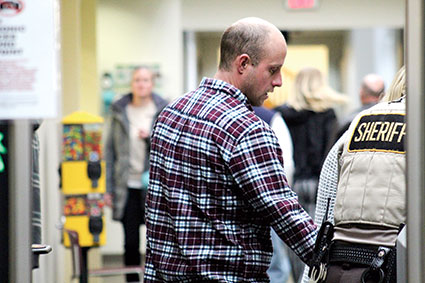 Jeremy Post, brother of the late Rachel Harberts and uncle to the late Emerson Harberts goes through security metal detectors at the Dodge County Courthouse to hear the sentencing of Tanner Kruckeberg. Hannah Yang/hannah.yang@austindailyherald.com

However, Post also shared that he wanted Kruckeberg to know that it was important for him to learn from the consequences of his actions, noting that people hating him would only reopen wounds for a family trying to heal and move forward.

“Just…this sucked the joy of that part of my life forever,” Post said with his voice wavering from anger and grief. “These are childhood memories that are supposed to be positive reminders of you of your sister….it leads right back to what happened to my sister, and now corrupted that joy. They’re gone.”

Rachel’s mother, Sharon Post, spoke of Emerson as a “beautiful, blue-eyed, blonde-haired girl who loved dresses,” and how proud she was of her granddaughter. As much as she could wonder how much Emerson had to offer the world, that would never be known.

“I know Emerson would have lit up this world and made a difference,” she said, noting that not only was a wife and daughter lost, but Jaxon was also no longer as he used to be. Instead, he has to struggle with his own experiences of surviving the crash that claimed his mom and sister.

“Jaxon has been challenged more this last year than anyone should have to endure,” Sharon added.

Then came the difficult statement from Brandon Harberts, husband and father, who didn’t come prepared with any written statements. Instead, he recounted the first time he met Rachel. Describing her to be “so beautiful” and how he never thought “a woman like her would date a guy like me,” as well as the difficult journey of conceiving children.

They met in the spring of 1996, and Brandon was awestruck by Rachel’s beauty. They ended up getting married only a few years later. Brandon shared with the court that his daughter was a miracle and that there was “one in a million chance” that they would be able to conceive naturally.

Noting Rachel’s punctuality, he was surprised to get a call from the school that she was not in the classroom and was wondering if he had heard from her. Brandon shared that Rachel would be “the first one at the school, even beating the superintendent and principal” and that this was not normal for her.

At first lightheartedly joking that Rachel maybe had some car trouble on her way to work, he received a phone call that shattered his world. He wept openly as he shared the pain he was afflicted from losing his wife and daughter, describing him and Jaxon as “the only two left of our family.”

“A state trooper called,” he choked through tears. “There was a bad accident on 14. The worst thoughts come into your head…no one wins in this situation. There’s not a day goes by where I don’t cry for my wife and my daughter. I don’t know how Jaxon is feeling…he won’t talk to anyone…this is something that I’ll have to live with for the rest of my life.”Kruckeberg’s family supported him with letters that were submitted to the court prior to the sentencing. One included a letter from his mother Patty Kruckeberg, who wrote that “most of us are guilty of some type of distracted driving.”

“I know I am,” she wrote. “I’m very proud of my son for having the courage to admit it also. I just wish people could see the hurt and pain Tanner carries with him everyday and know the kind, caring, loving man that I know he is.”

Eleanor Thompson, Kruckeberg’s grandmother, also submitted a letter, stating she prays for her grandson to find peace and learn to forgive himself.

“No amount of jail time is going to make him remember the family any more, it is something he’ll never forget and will have to live with for the rest of his life,” Thompson wrote. “It was a terrible, tragic accident that leaves us asking God…why?”

Before doling out the sentence, Williamson asked Kruckeberg if he had anything left to say to the family, to which he cried and addressed the people who were present.

“I want everyone to know I blame nobody but myself in all of it,” he sobbed. “I will never forget what happened on that day. I do not expect forgiveness…I cannot say enough how truly sorry I am.”