The Discover Austin Board of Directors assembled for their monthly meeting on Tuesday afternoon, Nov. 26. The meeting rotates locations monthly, and the locale for this particular meeting was at Packer Arena. 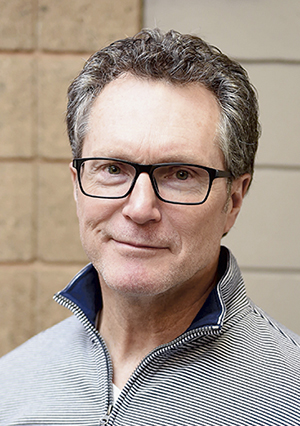 Before I highlight the fun, I’ll overview for readers the work that goes into prepping for curling each day/night as well as a bit about the game.

First, the granite “stones,” eight for each team of four players, need to be brought onto the ice, to chill them to the same temperature as the ice. It takes several hours to get them down to temperature, so they need to be moved around on the ice, to make certain that they do not melt into the ice (from their weight and slightly warmer temperature).

Allowing such would mean leaving dips in the ice from the stones, which weigh up to 44 pounds each, slightly melting into the ice surface.

During stone chilling process, the arena supervisor goes about ‘pebbling’ the ice. Pebbling is done using a sprayer or other mist-creating device, sprinkling water droplets onto the ice which freeze into small pebbles on the surface of the ice.

Oops, remember to move the stones, Lewis! The frozen ice pebbles serve at least a three-fold purpose: first, they provide an ice surface with less friction, so that the bottoms of the stones can ride on the small pebbles of ice, heating up the ice pebbles and creating a very thin layer of water over which the stones glide; second, the leading edge of the concave bottom surface of the stones bites into the pebbles ever so slightly (especially as they slow to a near stop), after the stones are released from the players hand with a slight curling motion; third, the ice pebbles actually make for slight traction bumps for the shoes of players who are walking or running on the surface.

So, curling ice isn’t necessarily slippery for someone wearing typical shoes. However, a pair of curling shoes have two distinct bottom surfaces: the “gripper” (rear) shoe has sole traction, and the “slider” (front) shoe has a hard surface bottom, enabling the player to slide on their front foot whilst being propelled by their trailing foot. Beginners can utilize a sole-sized slider with their front foot just as they are pushing off the hack. For those who don’t care to slide on the ice, the stone can be delivered (pushed) with a curling stick instead.

Now, onto the action! The majority of our group was adventurous enough to take to the ice. We each got to practice sliding the stones toward the target “house” (circle) near opposing ends of the sheet of ice. I’m not certain which was more challenging (or fun), attempting to slide the stones with the correct trajectory, speed, and a bit of a curling motion in the release, or attempting to have some grace and finesse in the process. It was and can be a little tricky; it was also highly entertaining.

As we slid the stones, two of our teammates were either watching and cheering, as they were “sweeping” in front of the gliding stones, directing them to the “house” destination, or the other teammate was cheering and then sweeping in front of the competitions gliding stones near their “house” destination in an attempt to have the stones pass through the house (scoring zone). Between the two teams, we scored a total of one point, and we had a lot of fun in the process. Our two mentors and instructors for the adventure, Dan and Peter, were very helpful and patient (as was Lewis in his prep of the ice and stones). Dan and Peter both invite newbies, men or women, boys and girls, to participate in the present league schedule as a sub or in the upcoming season after the first of the year.

You can locate their information on the Mower County Curling Club’s website. We’ll have some new curling equipment (some for kids as well) arriving after the first of the year, thanks to the recent approval of the $20,000 grant request by The Hormel Foundation.

We hope to see you on the ice or enjoying your Minnesota winter in some other exciting way!

Lastly, the Jay C. Hormel Nature Center program, which was to be offered by Matt Freecheck on Dec. 2, has unfortunately been cancelled. Please check back for other excellent nature center programs opportunities.