Full Circle: And you thought your puberty was rough

I’ll bet you a pretty penny that in the long history of the Austin Daily Herald, it has never run a doozy of a story like the one you’re about to read. It truly stands alone in its uniqueness.  Some of you know that I spent nearly three decades on the other side of the world …  and let me remind you it is no joke that it’s called the Far East because it really is faaar! In all that time I collected piles and stacks and mountains of interesting articles and it is your good fortune that I recently ran across this one.

The setting is Peking, China. The year is 1982. Two men are being interviewed. Their names are Sun Yaoting and Ma Deqing. They are both 80 years old. At the time of this interview, only one other person in the world still existed who could claim to sharing their same tragic background. Unquestionably, these men are relics of China’s Imperial past. 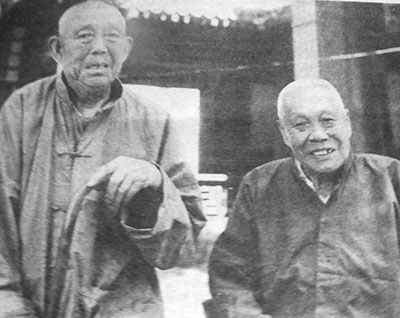 In the 1960s, both men were made wards of the state. They lived pleasant lives behind the iron doors of an elegant courtyard, where they tended the pond’s goldfish and its surrounding flower gardens. But, prior to this, during the days of the dying Qing Dynasty, they lived a vastly different existence inside the walls of the daunting Forbidden City.

When the young Sun began his career, he was a poised, diminutive and relatively rich eunuch, earning 20 taels of silver a month as the chosen eunuch of the fickle teenage Empress Wan Rong. Close to her in age, he poured her tea, washed her hands and supported her arm when she walked.

Not so fortunate was Ma Deqing. He was large, ungainly and illiterate and worked as a coolie doing the most menial work in the palace. Frequently he was beaten and from his measly salary he was required to pay the equivalent of $1 to have his queue braided. (Reckon he was lucky pigtails were not the rage or it would have cost him double!)

Sun was the eldest of three sons in a peasant family of beggars. Many such families wanted their sons to become eunuchs so the boys could send their wages home. At age 10, Sun’s family decided he should become such a bread winner. There were, however, so many boys on the imperial castration waiting list that it wasn’t until 1916, when he turned 16, that he was finally accepted. (And here you thought our military draft had an unfair ring to it!)

For eight years Sun lived in the Forbidden City under the rule of Emperor Pu Yi until his reign was overthrown by the warlord Feng Yu Hsiang.  Sun’s job was to perform all manner of tasks that helped China’s greatest household to run smoothly: he tied the emperor’s shoes, told him stories, transmitted edicts, burned incense, fed the animals, checked the clocks for accuracy, scrubbed the floors, guarded the treasures and recited the classics. Every evening at sunset a bell rang announcing it was time for all the men to leave the city.  All the men, that is, except for those of the imperial family and the eunuchs.

In 1924, both the imperial family and the eunuchs were expelled from the palace.  Sun was flung into a world where he no longer had a role and was no longer protected by high lofty walls. “I was seized by a great sadness,” he lamented.  “Where was I to go?  Who would want me?  What would become of me?”

By then no one in China wanted to hire eunuchs. They were treated with humiliation, leaving them no recourse but to turn to peddling, or even worse, begging. Eventually, 30 or 40 eunuchs pooled their money, and in an act of fluctuating expectations, bought land in the western district of Peking. There they built the Taoist Xing Long Monastery, where they scraped by farming and collecting the small rents on their homes. For the next 25 years the men’s lives were ones of idleness, seclusion, sadness and poverty.

With, the Communist victory in 1949, the People’s Republic took over the temples and the monasteries. Thirty eunuchs were taken under the wing of the state. Sun was one of them. He became a clerk. Thus after living the most oppressed of all lives in the old society, he was given a legitimate job, he was protected and he was respected. A lifetime of misery was over and finally he, along with his fellow eunuchs, were able to lead happy lives.

Ma and Sun have been friends for 50 years. Their peasant roots, the castration they endured in order to help their families, and their shared social status as freaks and outcasts have bound them tightly together.

In 1982, at the time of this interview, Sun was receiving approximately $37 a month from the government. He ate his meals in a collective dining room.  Attendants steadied him because he was walking with a cane, pillows were placed in his chair for his comfort, and there were nurses to look after him.  On occasion he even took short walks in the evening because he was no longer afraid to venture out.  “Nowadays,” Sun was heard to say, “people are kind to me.”

This column ought to give you pause for reflection. What, pray tell, were we occupied with when we were 16 years old? Let’s face it, our heads were awhirl with thoughts of the latest cool fashions, duck tail hairdos, cars, school dances, sports and above all … sex!  Castration was a word not yet in our vocabulary — unless we lived on a cattle farm. Besides, I doubt we could have spelled a word with that many letters. There was, thank goodness, simply no earthly way in which such a concept could have ever applied to us.

Our privileges were beyond abundant!  Too many to count. But most of all, we kids had the great fortune to grow up in Austin, Minnesota … and not in China. The only Forbidden City we had to deal with was Principal Wescott’s office.