Woman charged with stealing $1,200 from residence; Claimed she was ‘hanging on to’ the cash for the victim 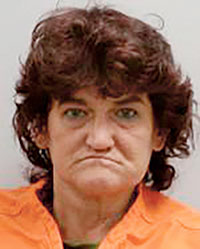 According to the court complaint, Austin police were dispatched at about 5:47 p.m. on Friday regarding a theft report in the 900 block of Second Avenue Northeast. Dispatch advised that a man at the residence had reported that Muhlbauer had stolen $1,200 in cash from him.

The victim reported that $1,200 he had hidden in a walk-in closet was gone, so he called Muhlbauer, who did not answer her phone. He left her a message saying that if she did not return the money, he would call the police.

The victim advised the stolen money was in $100 bills.

Police located Muhlbauer at a residence in the 100 block of Second Avenue Southeast. An officer advised Muhlbauer of the situation and she denied taking the money, saying she had only sat in the living room and watched television. She said the victim had given her $200 and she had spent all but $60 of it. An officer informed her that it had been reported she had gone upstairs at the victim’s residence. When the officer asked if he could look in her purse, Muhlbauer initially said no, then said she would have to go to another residence to get her purse.

While Muhlbauer went through a brown money pouch in her purse, the officer observed a closed zipper area in the pouch that Muhlbauer was not opening. The officer asked to look at it and discovered $1,000 in $100 bills in the pouch. Muhlbauer initially claimed she was “hanging on to (the cash)” for the victim, then admitted the money belonged to the victim and that she had taken it without permission.

Muhlbauer was taken to the Mower County Jail, where she advised police she had a methamphetamine pipe in her purse.

A review of Muhlbauer’s criminal record shows a prior conviction for drug possession.

Muhlbauer will appear in court again on Oct. 28