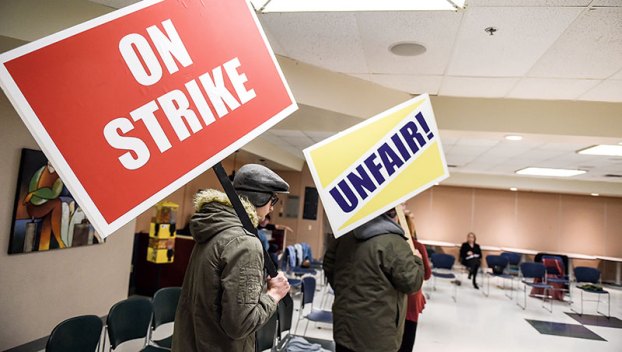 Ed Dreyer prepares to enter the stage area during rehearsal of “Wilson’s Girl: Unpacking The Beef in a Minnesota Town,” Wednesday night. Photos by Eric Johnson/photodesk@austindailyherald.com

Unpacking a Story: RCC Theatre starting out 2019-20 season with a bang

The Riverland Community College Theatre Department is starting out its 2019-20 season with a bang with the premiere of “Wilson’s Girl: Unpacking The Beef in a Minnesota Town,” starting Friday night.

But don’t go to this show expecting the same kind of performances you’re used to seeing. This is a one of a kind show that will set the pace for the entire season.

“There are a lot of firsts for us as a department,” said Riverland Theatre head Lindsey Duoos Williams. “This is a brand new play written by playwright Eva Barr.”

That’s just the tip of the iceberg of what this play presents. Barr grew up in Albert Lea and is helping bring the story, originally written by Cheri Register in her 2001 memoir of the strike at Wilson’s meatpacking plant in 1959, “ Packinghouse Daughter.”

To help with production, Barr has been on campus helping guide the play to where it needs to be, providing tips and rewrites to the actors as they go. But that is also one of the challenges the cast and crew have had to work with — the rewrites, something that has become a necessity with a play that has never been performed.

As the cast and crew rehearse, Barr is watching and making changes as things go. 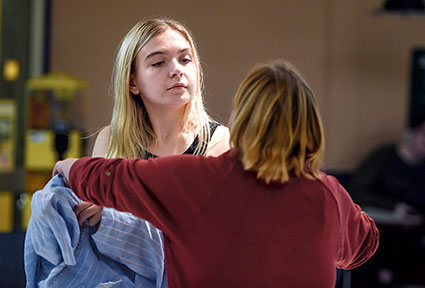 “The process has made it really unique for us,” Duoos Williams said. “It’s still being developed and we’ve been very fortunate that she has been on campus.”

The experience for the attendees will be different as well and in a big way. Most plays at Riverland are performed on the stage of Frank W. Bridges Theatre, but not “Wilson’s Girl.” This will be an entirely different performance because of the way it’s written.

“It is not being performed in our theater,” Duoos Williams explained. “It was originally written and conceived to be performed in a non-traditional space.”

And for this play, the non-traditional space will be in the Riverland West Building cafeteria — in the round. Which means that as the play is performed, the audience will be seated around the cast.

In Albert Lea, another first for Riverland Theatre, the play will be performed in the commons.

“And then we will pack up the show and move it to Albert Lea, in their commons,” Williams said. “It just seemed like the perfect opportunity to do it because it’s about Albert Lea and it’s meant for non-traditional spaces.”

This does present some challenges for technical director John Deyo. The set has to be built around mobility, so rather than big set pieces, smaller pieces and props will be used to set the scenes. 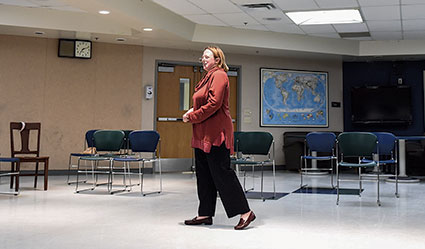 However, as the play is written for a more intimate setting, it opens the stage to a more personal setting as well. It’s written to invoke dialog about the piece of history from Albert Lea’s past. In that regard there will be post show discussions about the event after performances.

The first set of performances, to be performed in the Riverland West Cafeteria will be 7 p.m. both Oct. 4 and 5 and 2 p.m. Oct. 6.

Tickets can be purchased online at www.riverland.edu/tickets.

“Wilson’s Girl: Unpacking The Beef in a Minnesota Town”

The Caravan du Nord, sponsored by 89.3 The Current, is coming back to Austin this Saturday with a familiar face.... read more