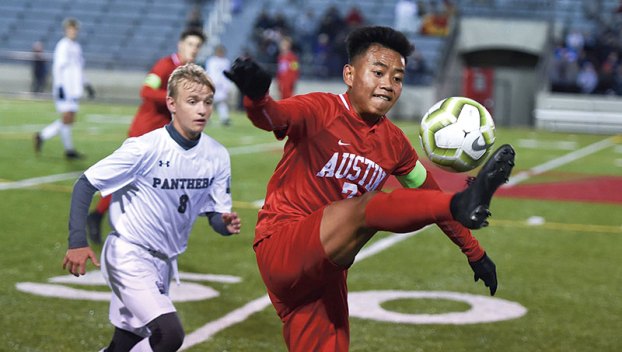 Austin’s Kee Reh goes after the ball during the first half against Rochester Century Thursday night at Art Hass Stadium. Photos by Eric Johnson/photodesk@austindailyherald.com

It didn’t come easy, but the Austin boys soccer team locked up its third straight Big Nine Conference title, coming up with a clutch play in the late minutes to beat Rochester Century 2-1 in Art Hass Stadium Thursday night.

Austin scored the game-winner when Andres Garcia broke down the Century defense before he dumped a crossing pass off to Julio Hernandez, who struck gold, blasting a shot through to make it a 2-1 Austin lead with 3:33 left in the contest. The score came just six minutes after Austin had a goal called off due to offsides and it also came after Garcia, a junior, had a couple of rocket shots stopped at the net.

“It’s very emotional. We came in here, trying to win with everything we put our minds to,” Garcia said. “We fought throughout the whole game. Being down 1-0 didn’t stop us. It was just me being a competitive person, I try to do what’s best for my team to win.” 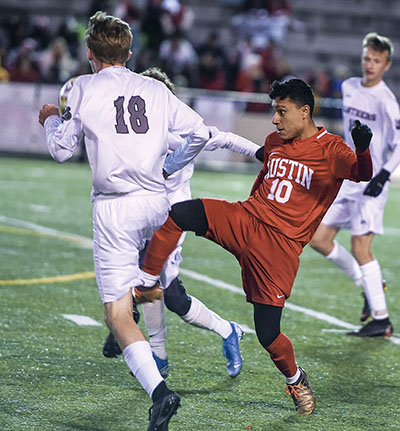 Austin’s Julio Hernandez lunges into the fray, toward the ball during the first half Thursday night at Art Hass Stadium. Eric Johnson/photodesk@austindailyherald.com

Hernandez also scored on a penalty kick with eight minutes left in the first half to tie the game at 1-1, just 35 seconds after Century (7-8-1 overall, 6-4-1 Big Nine) had taken a 1-0 lead on a goal by Jacob Watson.

Hernandez, a senior, had a little extra motivation throughout the night.

“I want to shout out to my grandma who is sick right now. I love her so much and every time I play, it’s for her. I think about my family and the people that support me and believe in me,” Hernandez said. “We knew we had to come out hard in the second half. We wanted to win the title tonight. This is a good program, because we’ve had great teams and we have players that push themselves and they fight hard for this town.” 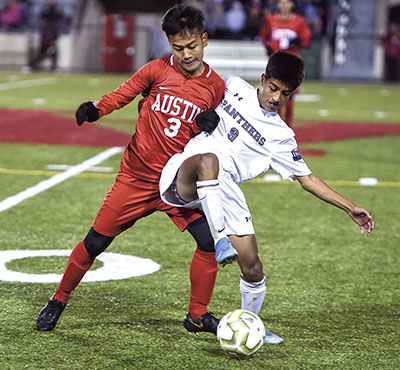 The Packers have simply been dominant over the last three years as they’ve put together a record of 47-5-5 overall, while racking up their three straight Big Nine titles. Austin has taken third place in the Minnesota Class A State Boys Soccer Tournament in each of the past two seasons and two of its five losses in the last three years have taken place at state.

In the past three years Austin has had only one conference loss, a 1-0 loss to Rochester Mayo in 2018.

The Packers began this season by honoring the 2009 team, which was the first Packer team to go to state.

“Ten years ago was the first time that we first got on the scene, but even then we were still in the middle of the conference,” Austin head coach Jens Levisen said. “Now we’ve got three conference titles in a row. The kids realize the team will take them through, not an individual. You see guys fighting for it, but not selfishly fighting for it. They have a lot of drive and a lot of grind.”